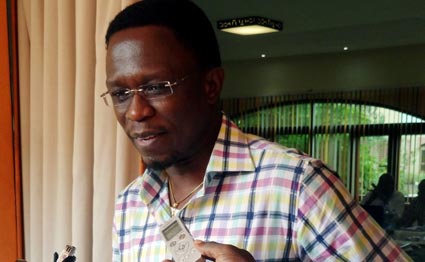 Word along the Orange house corridors has it that ODM national elections board and National Executive Board will tomorrow jointly name Moses Kajwang as the ODM flag bearer for the upcoming Homa Bay senatorial by -election slated for Feb 10th 2015.

Moses was the rated 4th by the national elections board after Silas Jakakimba, Mzee Philip Okundi and Businessman Fred Rabongo in that order, he tied at forth place with local billionaire Omondi Caroli aka Dangote.

Word in the orange house corridors indicate that the decision to a ward the certificate to Moses was taken a while back ostensibly to reward the family for the late family’s loyalty. There is a roaming danger that independent candidate Hilary Alila may turn tables on ODM given the fact Moses is unpopular on the ground.

It is widely known and agreed that the late senator Kajwang was a national sensation who often got his way in Homa Bay due to his close relationship with party leader Raila Odinga. In 2013 Raila had to calm masses who heckled the late Kajwang for demanding that the county should vote him and ODM candidates just because they were party members>>> watch video below.

The party expects that all the other candidates will rally their support behind Moses- this is highly unlikely given the circumstances around which Moses was given the ticket.

What other candidates will most likely find unacceptable is that Moses Kajwang did not go to campaign for the nominations that were slated for December 13th 2014, he only showed up 36 hours before the nominations with hired goons from Baba Dogo who later caused the chaos. The leading candidates Silas Jakakimba, Philip Okundi and Fred Rabongo have spent a considerable amount of time and resources and all they wanted was a fair process.

Moses Kajwang will win only if all the other seven ODM contenders throw in the towel and join him in the campaigns.

We wait to see if Party loyalists and top contenders Jakakimba, Rabongo and Okundi will offer their support to Moses.

For ODM the point is not if they retain the seat BUT a wider algebra especially the issue of voter apathy in South Nyanza. Whereas Mt Kenya region populace registered massively with the IEBC as voters, in Nyanza many people did NOT see the reason to register and the ODM nominations proofed them right a move that could later help Jubilee rig themselves to power through the dubious tyranny of numbers!