Homa Bay senate hopefuls Philip Okundi and Silas Jakakimba are planning to launch a complain with IEBC in what they termed as use of county public resources to campaign for ODM candidate Moses Kajwang’. On Sunday 28th December 2015 Col Rasanga governor of the great county of Siaya joined the Moses Kajwang’ campaigns riding his official four wheel car.

When reached for comment Team Jakakimba only offered a light comment thus” they are deploying all resources to fight mtu mdogo, we think team Kajwang’ is in panic mood.”

The Law, prohibits use of National or County Government resources – financial, vehicular or otherwise, in political campaigns. This is something which ODM has always blasted the ruling administration on.

As aspirants, we recently met IEBC and Registrar of Political Parties in a joint forum in Homa-Bay. It was explained clearly that public campaigns must only commence after 15th Jan., 2015, and that any public campaign before then, and after 27th Dec., may attract a disqualification of the candidate concerned should any constituent of Homa-Bay County lodge a complaint.

Our worthy opponents, be ware.

Moses Kajwang’ the ODM candidate was introduced to Homa County today by the ODM brigade led by Col Rasanga, Chairman Mbandi, Hon Kaluma and a battery of ODM allied bloggers in a roadshow across the county.

Below is the photo of Col Rasanga in the campaign trail with his official car. 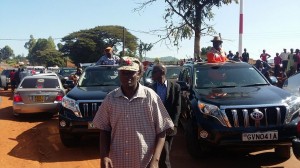 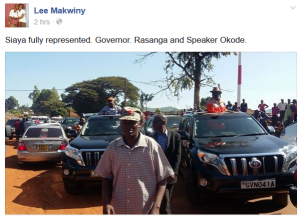