Orange Democratic Movement (ODM) party has distanced itself from reports on Raila Odinga’s planned tour of Kisii and Nyamira counties.

On Sunday, multiple reports in the media indicated that the former Prime Minister was scheduled for a tour of the Gusii land this week, just days after Deputy President William Ruto toured the region.

So far, Raila has traversed Taita Taveta, Kwale and Mombasa counties where he has been spreading the BBI message in every tour.

His coastal region tour had also come days after DP Ruto had toured the region. Media was on Sunday September 13, 2020 filled with speculations that Raila was set to land in Gusii land to consolidate his political strongholds ahead of 2022 general elections.

However, the ODM party through Secretary General Edwin Sifuna in a statement issued on Monday September 14, 2020 lashed out at the media over the reports.

Sifuna said that there was no such planned schedule for Raila as claimed by the media.

Sifuna went ahead to note that Raila’s schedules are announced to the public through the media by ODM party’s communication team, and that the team had not made such announcements. 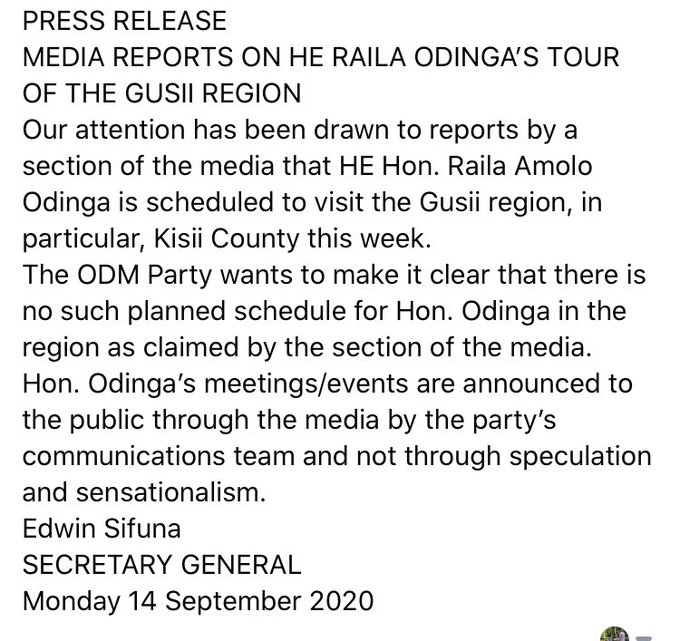 It had been believed that Raila was to tour the region to outdo the DP Ruto factor. Ruto while on his tour of the region pulled the masses, with a section of residents assuring him of support ahead of 2022.

Some politicians from the region who had accompanied DP Ruto went ahead to assure him that the region was behind the hustler nation.

Will Raila manage to outdo the DP Ruto factor in regions believed to be his political strongholds?

PRESS RELEASE
MEDIA REPORTS ON HE RAILA ODINGA’S TOUR OF THE GUSII REGION
Our attention has been drawn to reports by a section of the media that HE Hon. Raila Amolo Odinga is scheduled to visit the Gusii region, in particular, Kisii County this week.
The ODM Party wants to make it clear that there is no such planned schedule for Hon. Odinga in the region as claimed by the section of the media.
Hon. Odinga’s meetings/events are announced to the public through the media by the party’s communications team and not through speculation and sensationalism.
Edwin Sifuna
SECRETARY GENERAL
Monday 14 September 2020