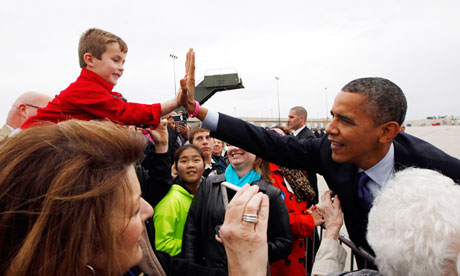 President lands blows on Romney over Benghazi, women and tax, and heads to Iowa and Ohio before third debate next week

Barack Obama hit the campaign trail only hours after coming out on top in a feisty debate with Mitt Romney that went a long way to calming the sense of panic that had begun to enter Democratic ranks.

Obama, transformed from the listless, unfocused candidate who lost badly to Romney in the first presidential debate in Denver a fortnight ago, landed damaging blows on his Republican rival in telling exchanges over women’s rights, the Benghazi consulate attack and tax proposals.

An odd, patronising remark Romney made to “whole binders full of women”, in reference to job appointments, may end up bringing to a halt a shift of women voters in Romney’s direction that has been worrying the Obama campaign.

It will be several days before reliable polls gauge the overall response to the debate but Democrats expressed confidence that Obama’s showing would lift them.

“I don’t know what the polls are going to say but I feel very, very good about going into the next 20 days or so,” vice-president Joe Biden told ABC.

However, although Obama was deemed to have won the second presidential debate in Long Island, it was not as lopsided as the first and so is unlikely to have the same dramatic impact on the polls. Since Denver, Romney has eaten into Obama’s lead and the two are now tied nationally and in most of the swing states, suggesting a tight finish on 6 November.

Romney had a few good moments of his own in the debate, especially over the economy, with an answer that might have resonated with voters.

Obama, after flying back to Washington from the debate on Tuesday night, left the White House at about 8am, heading for two swing states, Iowa and Ohio, the latter being the state that may in the end decide the election.

As part of the push to hold Ohio that has seen Democrats flooding the state with volunteers, Bill Clinton and Bruce Springsteen are appearing together at a free concert in Parma.

He and Obama go into the third and final presidential debate, in Boca Raton, Florida, on Monday, having won one debate each. The Florida debate is devoted to foreign policy, which, in theory, should be easier for Obama, who as president deals with security and overseas issues daily.

The Obama team, in the spin room next to the Long Island debating hall, were in better spirits than their Romney counterparts.

Conservatives â€“ some of them, anyway â€“ reluctantly awarded the night to Obama. The conservative commentator Charles Krauthammer told Fox News: “I think on points, if you were scoring it on points, Obama wins.”

On the same network Bush’s former strategist, Karl Rove, who runs one of the biggest Super Pacs backing Romney, criticised Obama for failing to set out what he would do in a second term but also conceded that Romney had made mistakes.

“Governor Romney, in my opinion, made a mistake asking questions of President Obama. You never ask a question and give your opponent a chance to offer an answer,” Rove said.

In the 90-minute debate, watched by tens of millions of Americans, Obama appeared to have learned lessons from the previous debate, retaining eye contact with Romney, with the questioners and with the camera, instead of burying his head in a notebook.

His personal hostility towards Romney was apparent during several exchanges when the two went head-to-head. He accused Romney of being more extreme on social issues than George W Bush and described his tax plans as “a sketchy deal”.

But the most politically damaging moment for Romney came when he bungled his attack on the Obama administration’s handling of the assault on the Benghazi consulate in which the US ambassador Chris Stevens and three other Americans were killed.

It should have been an easy one for Romney, after days of shifting accounts from administration officials who initially blamed the attack on a protest over an anti-Islamic film but have now conceded it was a pre-planned terrorist attack.

Obama’s response provided the most moving and powerful part of the night. “The day after the attack, governor, I stood in the Rose Garden, and I told the American people and the world that we are going to find out exactly what happened, that this was an act of terror.

When Romney tried to challenge the president over his assertion that he had described it as an act of terror, the moderator Candy Crowley intervened to say that Obama was correct. “He did, in fact, sir,” she told Romney, who was unable to counter-attack.

Conservatives criticised Crowley’s intervention, pointing out that Obama had been talking generally and ambiguously about an act of terror and it had not necessarily been a direct reference to Benghazi.

Obama also hit home in an exchange over Romney’s investments in China. When the Republican responded that Obama should look at the investments in his own pension, Obama, with his trademark grin, shot back: “I don’t look at my pension. It’s not as big as yours.”

The power of the quip was that it encapsulated the image the Democrats have been labouring to put across of Romney as rich and elitist, in a different league from the majority of Americans.

The two are battling hard for women’s votes. Obama has for months enjoyed a bigger share of support among potential women voters but Romney has been closing the gap over the last fortnight. But he may have lost some with an odd comment about when governor of Massachusetts he was concerned about lack of women in his cabinet and asked women’s groups for names. He said they came forward with “whole binders full of women”.