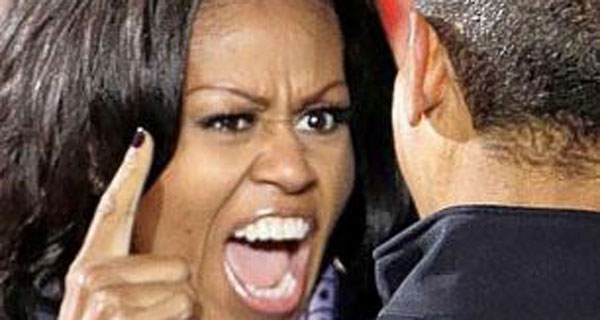 Michelle Obama was 50 yesterday and President Barack Obama will be feting his redoubtable First Lady tonight with a party that will give them the chance to let their hair down and forget their troubles for a few hours.

Purse-lipped Washington etiquette experts have tutted at the informality of it all, but the Obamas have always been keen to appear accessible, even if the stand-offish reality is somewhat different.The Obamas are the worldâ€™s most scrutinised couple at the best of times, but it will be rare to find a guest at the bash who wonâ€™t be secretly watching them with particular interest. After all, the last time they were pictured together at Nelson Mandelaâ€™s memorial the First Lady was looking none too pleased as the her husband posed for a â€˜selfieâ€™ photograph with the leggy blonde Danish Prime Minister, Helle Thorning-Schmidt.

Indeed, if the U.S. tabloids are to be believed, the relationship of Washingtonâ€™s golden couple is facing problems that go far beyond dirty looks. Under the headline Obama Divorce Bombshell!, the National Enquirer claims their 21-year marriage has dissolved in a string of ugly fights that were prompted by the Mandela memorial incident and far more outrageously Mrs Obamaâ€™s discovery that Secret Service bodyguards had been covering up infidelity on her husbandâ€™s part.

Itâ€™s an allegation the White House has declined to comment on, though after Bill Clintonâ€™s trouser-dropping scandals, Americans would be rather less sanguine about any extra-marital activity than the French appear to be over President Francois Hollandeâ€™s behaviour.

For the moment, they are allegedly sleeping in separate bedrooms after Mr Obamaâ€™s attempt to â€˜mend fencesâ€™ backfired so badly on a recent Christmas getaway to Hawaii that he returned to Washington with their two daughters, leaving his wife behind. Mrs Obama, the Enquirer claims, intends to stand by her husband until his presidency is over, at which time he will move back to Hawaii, where he grew up, and she will stay in Washington with their children.