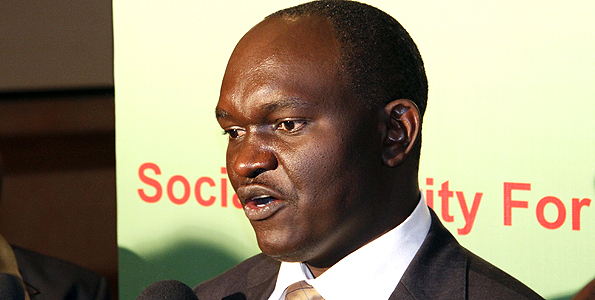 The minister did not offer any reasons for the decision to sack the NSSF managing trustee, but ordered that he vacates office immediately.

“I regret to inform you that your employment with the National Social Security Fund shall be terminated with immediate effect. In lieu of the three months you shall be paid an equivalent of three months pensionable pay.” said Mr Kazumbe in a letter to Mr Odongo.

Mr Odongo was asked to hand over to the corporation secretary Ms Hope Mwashumbe. “Please arrange to return any company property that is in your possession and hand over to Ms. Mwashumbe, the Corporation Secretary,” the letter read.

The NSSF boss has been in the news lately with the commissioning of what would be East Africa’s tallest building and the proposal to increase employee contributions across board.

He has been in office since February last year, when then occupant Alex Kazongo was sent packing by the NSSF board of trustees.

This comes shortly after Mr Odongo announced that NSSF will shed jobs for the second time in three months to reduce operating expenses and lift returns paid to retirees.

The pensionerâ€™s administrative costs have remained above the targeted two per cent of its total assets, prompting liquidity challenges.