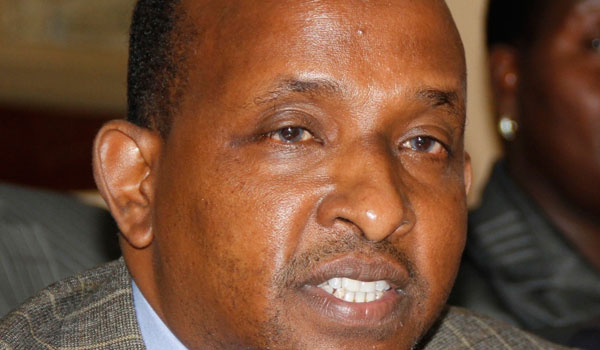 National Assembly majority leader Aden Duale has hit out at a section of Jubilee MPs he says are â€œbeing used to divide leaders and cause unease in the governmentâ€.

He said the leaders are turning into â€œspy agents and messengersâ€. Speaking at Ngâ€™oina in Buret during the home- coming party of Kericho womenâ€™s representative Hellen Chepkwony on Saturday, Duale said Nandi Hills MP Alfred Keter is a Cord mercenary being used to create differences among leaders in the Rift Valley. â€œWe are aware of these bogus party members who pretend to be our genuine members but are brokers. They are sent to divide and cause disturbance among us.

They should not pretend as we know them,â€ Duale said. â€œThese people are the ones who poked a lot of holes into the railway project and are now dictating how things should be done in the government.â€ The Garissa Town MP asked vernacular radio stations to moderate their content and be objective.

Duale said he is con- cerned about politicians who use local residents deemed to be influential in their backyards by paying them to speak ill of their proponents. He said such avenues cre- ate differences and division among the communities and leaders.

â€œWe know a few individuals who when you tune into a radio station they are speaking, accusing and criticising what every leader from a different camp has said. Theirs are negative criticisms meant to destroy.â€