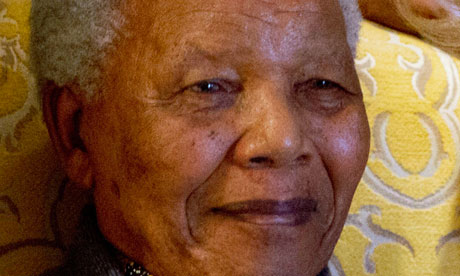 South Africa‘s former president Nelson Mandela has undergone successful surgery to remove gallstones as he recovers from a lung infection.

Doctors treating Mandela waited to perform the endoscopic surgery as they wanted to first attend to his lung ailment, the presidential spokesman Mac Maharaj said in a statement on Saturday.

Mandela has been in hospital since 8 December. The former African National Congress leader largely retired from public life after serving one five-year term as president and has lived a mostly private life since. He last made a public appearance when his country hosted the 2010 World Cup football tournament. He won the Nobel peace prize in 1993 with FW de Klerk, the last president of apartheid South Africa.

Mandela was admitted last week to a hospital in South Africa’s capital, Pretoria. However, government officials have contradicted themselves in recent days about Mandela’s location, which has sparked rumours about his health.

The 94-year-old has a history of lung problems, having contracted tuberculosis in 1988 toward the end of his 27 years in prison. Doctors said at the time the disease caused no permanent damage to his lungs but others say tuberculosis can cause problems years later.

He had an acute respiratory infection in January 2011. After the chaos that surrounded his stay at a public hospital then, the South African army took charge of his care and the government managed information about his health.