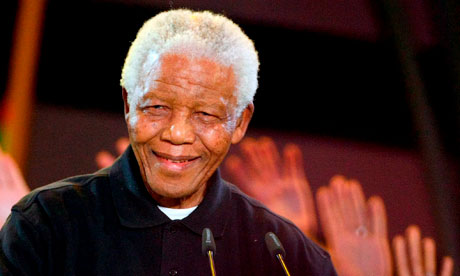 Former South African president, who was treated for lung infection and gallstones, will continue receiving care at home

Nelson Mandela has been discharged after 19 days in hospital during which he was treated for a lung infection and gallstones, the South African government said on Wednesday.

“He will undergo home-based high care at his Houghton [Johannesburg] home until he recovers fully,” said presidential spokesman Mac Maharaj in a statement.

The former South African president, who is 94-years-old, was admitted on 8 December to a Pretoria hospital. It was the longest time he had spent in hospital since his release in 1990 from 27 years in prison.

Maharaj, who was a political prisoner with Mandela in the 1970s, thanked the South African public and media for their prayers and good wishes and for respecting the elder statesman’s privacy. “We request a continuation of the privacy in order to allow for the best possible conditions for full recovery,” he said.

Mandela was visited in hospital by his family and President Jacob Zuma on Christmas morning but no details were given of plans for his discharge. President Zuma said he was “in good spirits” and looking “much better”.

Mandela has been admitted to hospital in Johannesburg and Pretoria three times in the past two years, including for an acute respiratory infection in January 2011. His eyes and lungs were damaged as a result of working in a limestone quarry on Robben Island, off Cape Town, where he spent 16 of his 27 years as a prisoner of the apartheid state.

The Nobel Prize winner, who was president of South Africa from 1994 to 1999, retired from public life in 2004. He was last seen in public in July 2010, during the closing ceremony of the World Cup. The US secretary of state Hillary Clinton paid a private visit to him in August.

Mandela’s current permanent home is in Qunu, a remote village in the Eastern Cape, where he spent much of his childhood. But no announcement has been made about whether he will be able to return there.