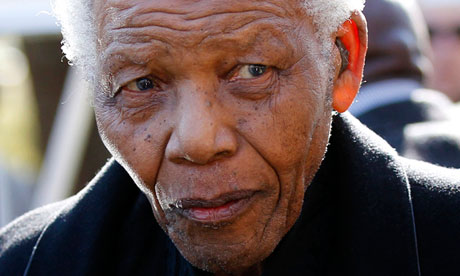 Nelson Mandela, who has been in hospital for more than two weeks. Photograph: Siphiwe Sibeko/AFP/Getty Images

Nelson Mandela is in good spirits and is looking much better’ said President Jacob Zuma after paying a Christmas morning visit to the 94-year-old former South African president in a Pretoria hospital.

Mandela was admitted for care on 8 December and has been treated for a lung infection and gallstones at an undisclosed hospital. It is the longest time he has spent in hospital since his release in 1990, after 27 years in prison.

Zuma said he had visited ‘Madiba” â€“ the clan name by which Mandela is known to South Africans â€“ alongside the former president’s wife, GraÃ§a Machel and members of the Mandela family. “We found him in good spirits. He shouted my clan name, Nxamalala, as I walked into the ward. He was happy to have visitors on this special day and is looking much better. The doctors are happy with the progress that he is making.”

Prayers were said for the elder statesman at midnight masses and Christmas Day services across South Africa. The African National Congress and the Zulus’ King Goodwill Zwelithini had earlier sent their good wishes and calls for prayers.

Presidential spokesman Mac Maharaj told the Guardian that Mandela had “quite boisterously” called out Zuma’s clan name. ”Very few people use that name. When you use a clan name, you don’t just say it, you actually shout it.”

Maharaj did not disclose details of Mandela’s condition but said he was being treated by a top team of specialists. ”I think it is quite legitimate with a 94-year-old to be cautious. You want to be absolutely sure that progress has reached such a stage that everyone is confident [before discharging them]. An infection in the lung can have a side effect in the toe, then go back to the chest. You cannot be too careful.”

He said he would not disclose the hospital at which Mandela is being treated. “Let us not crowd him. I want to shield him and I really want to shield the family,” said Maharaj, 77, who visited Mandela last week and is a close friend.

From 1964 until 1976, Maharaj served hard labour alongside Mandela at Robben Island prison, off Cape Town, where both men worked in a limestone quarry. Mandela contracted tuberculosis during that time.

Mandela, who was president of South Africa from 1994 â€“ 1999, retired from public life in 2004. He was last seen in public in July 2010, during the closing ceremony of the World Cup, when he was driven through Johannesburg’s Soccer City stadium on an electric golf cart.

He has been admitted to hospital in Johannesburg and Pretoria three times in the past two years, including for an acute respiratory infection in January 2011. In May this year, the presidency announced that he had moved permanently to Qunu, a rural village in the Eastern Cape, where he spent much of his childhood. The US secretary of state, Hillary Clinton, visited him there in August.

Reports said up to 11 people died in the crash in poor visibility in Giant’s Castle, in the Drakensberg mountains. The route is used every week by members of Mandela’s security and medical team, prompting speculation â€“ denied by the air force â€“ that the flight was carrying medical personnel, medicines or equipment for the elder statesman.