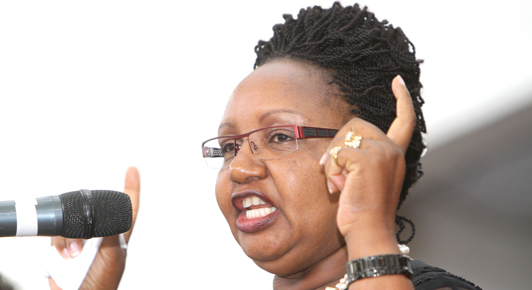 By Machua Koinange for the Standard

Nduku Kilonzo will not be running for the vacant Makueni Senate seat after all, The Standard can now reveal.

â€œI had a meeting on Monday night with members of my family including my children, brothers, sisters and close friends. They have advised me that this is not the right time and I am still mourning the loss of my husband. There will be another time,â€ she said on Tuesday.

What is more, she will throw her full support behind her step-daughter, Kethi Kilonzo, should she decide to jump back into the race for the seat.

â€œI will throw my support behind Kethi should she decide to run. I will fully support her.â€

Last night, it was still unclear if Kethi would reconsider her decision and get back in the race in the light of her stepmotherâ€™s decision to step aside. Efforts to reach her were fruitless and close friends confided to The Standard that she was probably keeping a low profile due to the publicity generated by the senate race.

The stunning development brings to an end the possible remarkable match-up for the Makueni by-election scheduled for July 22 that would have pitted step-mother versus step-daughter. The by-election is being held in the same month that the late Mutula was born. He was born on July 2.

That was an additional reason for Nduku to pull out: â€œI have withdrawn from the race. Itâ€™s hard to run in the election in the same month that I am celebrating my late husbandâ€™s birthday. My role now is to hold my family together and run my late husbandâ€™s businesses, including his ranch.â€

>>> To read more of the story please highlight and right click this link http://www.standardmedia.co.ke/?articleID=2000085765&story_title=nduku-kilonzo-opts-out-of-makueni-senate-race-backs-kethi-kilonzo&pageNo=1