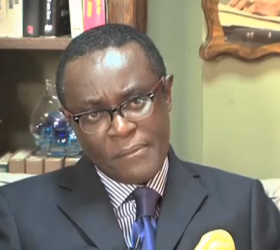 Mutahi Ngunyi has distanced himself from the “failing” presidency of Uhuru Kenyatta, in a tweet that went viral on Sunday 12th December 2013 Mutahi hit hard on Uhuru terming him “inadvisable”!
Mutahi did not spare the president’s team alleged”INCOMPETENT” advisors either, he mocked them saying “if he were to advice Uhuru it could be so obvious”!

Mutahi he of Tyranny of numbers is blaming Uhuru’s Propaganda machine for spreading malicious rumours that he was appointed president’s advisor. In the tweet Mutahi threatened to sue the Standard Newspaper for refering him to Uhuru advisor (Jesus of Gikomba!)

NOW this is a new low for Uhuru, this can send a even the strongesr to depression and the weak may even commit suicide. In extreme dictatorships like North Korea, Mutahi could have got his neck chopped off and fed to hungry dogs, nobody tells off a sitting president in such strong terms as “INADVISABLE”,Â  but wait a minute, just how terrible is uhuru’s presidency? other than Westgate, failed economy, insecurity everywhere, tribal appointments and easy mistakes what else is so rotten in this regime? is it that bad as Mutahi wants us to believe? this is indeed shocking!

I am NOT and NEVER WAS adviser to Uhuru.I am suing Sunday Standard for defamation and insulting my intelligence. I last saw Uhuru in 2007.

I am NOT and NEVER WAS adviser to Uhuru.I am suing Sunday Standard for defamation and insulting my intelligence. I last saw Uhuru in 2007

and then he adds

If I ever advise Uhuru, and if he is advisable, it will be obvious.

If I ever advise Uhuru, and if he is advisable, it will be obvious.

On insecurity Mutahi wondered why Uhuru was experimenting Kenya with greenhorn cabinet secretaries, here was his tweet back then;

Cabinet experiment with 'greenhorn' ministers is a disaster. Moving Ole Lenku from Assistant beverages manager to security boss is tragic.

“The script Ngunyi Mutahi is spinning is one of self-cleansing in the Public Court. Tyrannically hypocritical. I cannot fall for it. Even if he successfully sues The Standard Group, zero-sum. And he knows the moments cannot be any better for him to reincarnate and get lost public acceptance”

Please give your comment below on what you think of Mutahi’s FIRE!