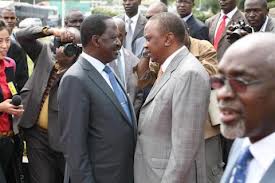 Ken Obura, the MP for Kisumu Central constituency, has penned an opinion piece in the Standard Newspaper where he attempts to call on Jubilee politicians, especially Mike Mbuvi Sonko, the Nairobi Senator, to show ‘respect’ for Hon. Raila Amolo Odinga.

At face value, Obura’s call convey a message a big chunk of Kenyans feel. The treatment Raila Odinga has recieved from Jubilee politicians is worse in a country where political interaction among politicians overcame KANU’s single party idiotic mindedness in an era when being seen with an opposition politician was akin to risking your political career.

Odinga’s handling, from JKIA Airport VIP saga to Kasarani Stadium recently, still points to bankruptcy in the country’s political courtesy vaults. A little credit though is in order. Let’s never forget that this country is only 50 years old.

Today, Kenyan politicians show remarkable courtesy to each other; even when they differ. However, there is no perfection in competitive politics, for politicians must be seen to be playing politics – that’s their profession – and they call it a game.

But there is a new political rhetoric in the country. I call it ‘propaganda for the future’. Many Kenyans, especially those aligned to the opposition CORD, often take president Uhuru Kenyatta’s “10 year rule” rhetoric as a spite on democratic institutions which conduct elections, and the public who vote. To this group, because the President will not elect himself, he needs to let the future alone decide his fate, and that of his Deputy, William Ruto. Nothing can be far from the truth.

Politically speaking, President Uhuru Kenyatta is way ahead in this game than any of his future competitors. From verbal propaganda and little nuances of president privilege, Uhuru has ingeniously reinvented state power. In western political parlance, it is called employing the “weight of the presidency”. Here in Africa, it may be called not using brute force to clear your enemies.

In just a little over 8 moths, Uhuru has been everything a President can be: a bully, a mourner-in-chief, a comforter-in-chief, the country’s chief diplomat, chief executive, and, quite saliently, chief legislator. Uhuru has been many other things. In the long list, one Machiavellian tactic endures: Pragmatic opportunism. Your president is an opportunistic fellow.

The pragmatic opportunist whom he is, Uhuru elevated the role of parliament in law making more than his own role, or that of the executive bureaucracy which he leads. Earlier, in widely applauded media breakfast where the journalists were sumptuously overfed, Uhuru had partnered with the media! In the end, no organ, not even the press itself, would wholly accuse the president of abrogating the law. Yet, with all intents, he ensured he remained the last man, and his pen the last ink, on a Law which he badly needed to pass.

As a bully, you sadly have to glance at the current political condition of his main challenger in the last election, Raila Odinga. At the beginning, he ensured Raila feels the pinch of state neglect. Uhuru withdrew all those accompaniments which the State provides. With privileges gone, one man became sorrier in physical state than was imagined by his supporters.

Then slowly, Uhuru begun to ‘regroup’ him, providing such little niceties as to neuter his resolve. As the key opposition figure, Uhuru called him to State House at a time Odinga could not refuse – the country would have jeered such insensitivity. State House became a bully pulpit: he lined all his former competitors, except jokers, and gave them the presidential dais to ‘talk to the country’.

What did Robert Green say about keeping your enemies closer? The opportunistic President has not only kept Odinga closer; he has also kept it comfortable, which is where the danger lurks.

Recently in Kisumu, Odinga openly told his listeners that “he too is part of the government”, that the “government drives him around”, something like it (government) fuels his cars!

This progression, from fierce competitor, to a sore loser, to a sorry loser, to a regime adversary-turned-apologist-turned-ally; should worry lovers of the country’s democratic ideals more than President Kenyatta’s own verbal outbursts! Why? Because history, and experience, has shown that you cannot effectively keep in check a government which chauffeurs you around, in and outside town!

It is Odinga as Jakom who fired Miguna among other epic mistakes and condoned the kind of ‘groupies’ who ensured he lost the last elections peacefully. Odinga as Agwambo was the man whose disciplined, raring political campaign machine almost sent Kibaki home, until they rigged it and retained power even as hell burnt brimstones and many Â were sent to purgatory.

We must be more afraid of Raila’s actions than Uhuru’s outbursts. Raila as Jakom; the comfortable “moving on” father of Kenya’s modern democracy, cannot win any future election where he shall be pitted against opportunists like Uhuru Kenyatta. Jakom, the leisurely old figure transitioning to the club of Kibakis and Mois and Njonjos of this country, cannot be president. The man whom Uhuru is sending to open Railway stations and inviting to state functions where he is barely recognised cannot be president. He cannot outshine the master. To think so is to delude ourselves.

Many in his inner circle know this. They just can’t say it loudly. It takes an outsider to do so. But there can be another Raila Odinga: the Agwambo!

I do not know how those close to Raila think. I have often wondered what they see as priority and what is essential and sustainable for the next five years. Seemingly, all one sees is subtle resignation. I may be a pessimist, but I Know the silver lining in dark clouds when I see one: I haven’t seen any so far.

As I conclude, it tempts to state that Raila Odinga as Jakom is as dangerous to this country as Uhuru’s 20 year apocalypse. The future is in Agwambo!