A photo captured the sitting arrangement at mama Fanice Ambetsa’s (Gov. Oparanya’s mum) funeral in Butere reveals the order of seniority of the local leaders.

Moses Wetangula is the senior most politician owing to his position as the minority leader in the senate, followed by governor Oparanya owing to his newly elevated status of deputy ODM party leader, hon Ababu Namwamba is third having bagged the prestigious ODM Secretary General position and also being chairman of the powerful PAC committee in parliament.
Mtetezi wa wanyonge senator Dr Boni Khalwale is forth while Mudavadi hangs at the bottom 5. 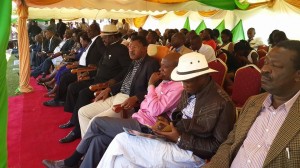 Mudavadi has Mary Wambui to blame for his diminished status, he agreed to be Kibaki’s project in the 2012/13 succession schemes, now he has been reduced to an ordinary mwanaichi.