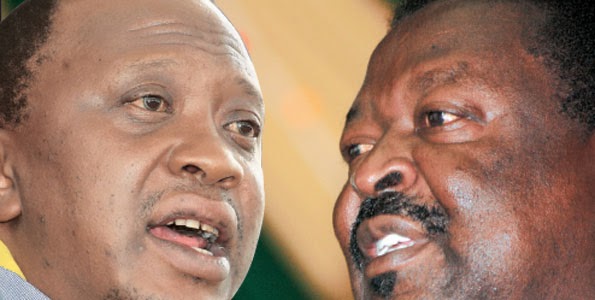 HURAAAY some tiny balls are emerging, former deputy PM has offered a stinging criticism on Uhuru’s state of the nation address!

………The former deputy Prime Minister said given the context of implementing the constitution â€œand an ambitious experiment to reconfigure the Executive administration, the president was within his limitations to talk about what he is doing rather than what he has done.

Mr Mudavadi however said the formation and reorganisation of government has taken too long, has been ad hoc and seems caught up in impacts of piece meal hesitation.

â€œThere seems to be an impasse on this, which then has affected coherence. But there are areas where he could have been succinct in the spirit of â€œought toâ€ have done because they have been within his remit in the first year even as he grappled with reorganisation of government,â€ he said.

He said domestic security is one area in which President Kenyatta could have explored why it is spiralling out of control of agencies.

â€œHe did report on capacity building â€” vehicles, housing, insurance for police. But in acknowledging lack of coordination among agencies he missed opportunity to state what interventions he has on board.
On this, the public is more interested in concrete measures than his sharing the identified problem with them,â€ Mr Mudavadi said.

He said the Head of State was also â€œsuspiciouslyâ€ economical on corruption.
â€œIt reflects a dilemma given his recent bold statements on ingrained corruption within his own office, and suspect revelations about the laptop and Standard Gauge Railway projects.â€

He said the Jubilee government rose on the crest of national reconciliation and integration and that it was also expected to do better on the matter.

â€œIDP settlement and welfare perks are clean-up responses inherited from the last regime. What is at stake is negative public perception that government is a two-community affair. This is homework that he needs to deliver.â€

WOW! This is super critism, Mudavadi talking tough on corruption, saying not reducing VAT was UNFORTUNATE and says Uhuru Goverment is a two TRIBE that the president needs to work on hahahaha Mudavadi is indeed MESSY ! Talk of signs of growing BALLS!