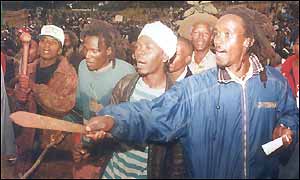 By Eric Wainaina for the Standard

Resurfacing of illegal gangs in Kiambu is worrying the business community.

Members of the outlawed Mungiki sect are alleged to be forcibly demanding money from matatu operators and business people in various shopping centres.

The Provincial Administration has confirmed that the members of the illegal sect are plotting to reclaim their previous status of controlling major economic sectors.

A matatu operator plying between Kiambu and Githunguri on condition of anonymity said the operators give Sh200 daily to the illegal gangs.

â€œWe give them money though not openly. They resort to violence once we refuse to remit the levies,â€ the operator said.

Operators plying between Gatundu, Thika, Kiganjo, Kiambu, Ruiru and Nairobi said the sect members have been demanding a levy of Sh200 from each matatu.

Last month, a matatu was set a blaze in Gatundu town after the operators allegedly declined to give the money to the sect.

Three matatu sacco officials in Gatundu have been murdered and Mungiki was blamed for it. The gang is also demanding money from business players and developers who are setting up buildings in the county, causing fear among the business fraternity.

â€œThey are collecting money from any income earning activity and given a chance, they will end up sending away investors because they also pose a security threat,â€ Paul Mwangi, a Githunguri resident said.

Kiambu County Commissioner Wilson Njega said they had arrested some of groupâ€™s members demanding cash from a construction site owner and were arraigned in court.

â€œWe are alert about this group ( Mungiki) and are not going to give them any chance to regroup,â€ Njega said.