Police in Kiambu are being blamed for the slow pace in investigations or the lack of it after the CEO of London Distillers Kenya Limited Aniv Galot was attacked at his home and no investigations whatsoever have been initiated.

It is alleged that Pravin Galot, a relation of the CEO threatened him with unspecified action before he physically assaulted him and further threatened to run him over during an altercation this week.

In a video that has since gone viral, the estranged Pravin who is currently facing multiple cases in the courts lunged at Aniv in an unprovoked attack at the vehicle parking within the palatial family home in Kiambu before they were separated by security and other members of the family.“We just don’t know what happened.

We were all in the compound and saw Pravin drive his car to where Aniv was. He parked the car and got out before he struck Aniv on the face.

It was really unprovoked and we are wondering why such action from an elder family member against a young Aniv.“Aniv never responds to provocation.

This is not just what we expect of other family members. Pravin is wrong and should be stopped immediately. This is not the first time we are having such from him and we hope it is the last,” says a witness at the palatial Galot family home. 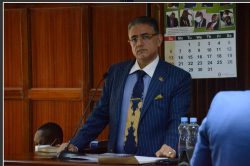 Several people reached for comment insist that police in the neighbourhood failed to react to the situation and even attempts to make a formal report were thwarted after the law enforcers turned a blind eye.“Imagine, we have been to the police station several time in the day and no action has been taken.

The criminal nature of the incident calls in the Directorate of Criminal Investigations (DCI) at the earliest prompt, but we are wondering how powerful Pravin is that he can keep police and the Persecution away in such an ugly incident.

“We understand the Prosecution office in Kiambu has decided not to act based in the friendly relations they have with Pravin and this is not good for this country at all. Pravin should be held responsible for his criminal acts,” said a relative who insists they were ready to provide the police and investigators wit h information about what actually happened.Aniv on the other hand declined to comment on the issue even as they sought police action on the matter that borders on his personal safety.

Pravin has been at the centre of the prolonged legal battle between his uncle Mohan Galot and his nephews and Mr Rajesh Galot — in the control of Galot Industries, Manchester Outfitters, King Woolen Mills, Mohan Meakin, London Distillers Kenya Ltd and M G Park.London Distillers and Mohan Meakin are producers of well-known alcoholic brands in Kenya.“Pravin Galot is not a director or shareholder of Galot Industries or any other company that I founded.

Before employing Pravin[to manage Manchester Outfitters (K) Ltd], I paid for his education in high school and university in the USA.

He failed to graduate and got no credentials.“Pravin registered a parallel company known as Manchester Outfitters East Africa Limited and used it to defraud my company. He fraudulently transferred my company property known as land reference number 24092 worth Sh800 million to his private company called Galot Holdings,” Mohan stated in his sworn affidavit to the courts.

Pravin and his uncle Mohan, a renowned billionaire businessman, are embroiled in a dispute over who is the legitimate managing director of the garment manufacturing company that was started over 60 years ago.

The company is one of the first and pioneer garment makers in Kenya and Mohan is accusing his nephew Pravin of fraud by registering a parallel company with almost a similar name, Manchester Outfitters (East Africa) Ltd.He claims that he invited his nephews (Pravin and Rajesh Galot) to join the family enterprises as directors, but kicked them out when they allegedly registered parallel companies in a bid to take over the business from him.

Mohan also claims that some of the parties in the dispute, in collusion with persons then employed by the office of the Attorney General conspired to falsify the record of Manchester Outfitters Limited and purported to appoint strangers as directors.The dispute is so complex that it was assigned three judges – Justices John Mativo, Grace Ngenye and Lilian Mutende – who have since started taking evidence of the two warring sides.

The three-judge bench is tasked with determining who are the legitimate directors and shareholders of Manchester Outfitters Limited and its subsidiaries.Court records indicate that there are at least 23 different cases, both civil and criminal, pending before the various levels of court, all related to the company and its directorship.

A vicious fight for control of the multi-billion shilling clothes maker, Manchester Outfitters Limited, is far from over as two family members jostle for power.