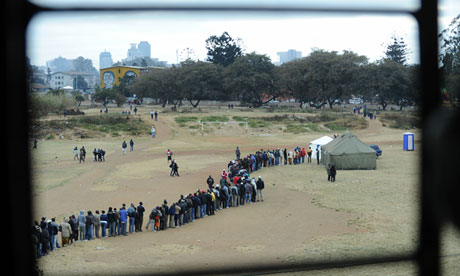 Zimbabweans waiting to vote on Wednesday at a Harare polling station. Zanu-PF is accused of rigging the polls by the opposition. Photograph: Alexander Joe/AFP/Getty
By David Smith in Harare for the guardian.com, Wednesday 31 July 2013 20.14 BST

Millions of Zimbabweans went to the polls on Wednesday in an election that opponents of Africa’s oldest leader, Robert Mugabe, condemned as “illegal, illegitimate, unfree and unfair”.

Voting was peaceful and turnout high across the country but the Movement for Democratic Change (MDC), attempting to end Mugabe’s 33-year-rule, claimed to have uncovered evidence of massive fraud and rigging.

“Thousands and thousands of people are being disenfranchised by virtue of not finding their names on the voters’ roll,” said Tendai Biti, the MDC secretary-general and finance minister in the government. He described election officials as arrogant and insensitive to the complaints.

Biti took matters into his own hands, storming into a polling station in the Mount Pleasant area of the capital, Harare, claiming that 2,000 voters, many of whom were underage, had been brought in from rural areas to vote for Mugabe’s Zanu-PF party.

“They don’t even stay in Mount Pleasant,” he snapped, turning to one voter and demanding that he name one street in the neighbourhood. The voter stared at Biti impassively and said nothing.

The minister fumed: “They can’t even be persuaded to lie, Zanu-PF is so desperate â€¦ we can’t cheat an election, guys. How can you cheat blatantly like this? It’s the mother of all rigging to prevent the mother of all defeats.”

One of the buses used to transport the voters had a sign for Honde Valley, more than 185 miles away near the Mozambican border, but the driver declined to say where he picked the passengers up. “It’s not a secret â€“ but we’re not allowed to say that,” he muttered.

An extra polling tent appeared to have been set up for the voters, most of whom were young and had shaved heads; all stared ahead silently and refused to speak. Biti claimed the shaved heads were synonymous with Zanu-PF’s youth militias.

Speaking into a mobile phone to demand a court injunction, Biti could be heard saying: “They are ultra rural, from the back of beyond.”

Zizhou Fambisai, the local election presiding officer, said he could not tell where the voters were from. A police officer insisted they were police recruits brought by bus from a nearby training base.

Earlier Biti had produced a long list of objections to the conduct of the elections, arguing that the voters’ roll contained two million invalid names, that there was renewed intimidation in rural areas, and that extra voting papers had been printed in a plot to swap ballot boxes.

“We’ve already made clear this election is illegal, illegitimate, unfree and unfair,” he said, while still predicting an MDC victory. “We are participating with a heavy heart.”

An independent election observer who analysed the roll last month also cited huge irregularities. “There are clearly hundreds of thousands of deceased people on the voters’ roll. Either that or Japan does not have the oldest age population in the world. There are thousands of 114-year-olds.”

At the last election, in 2008, the MDC leader, Morgan Tsvangirai, beat Mugabe in the first round but then withdrew from a run-off, citing violence in which more than 200 people died.

Eventually the two men formed a unity government with Tsvangirai as prime minister, bringing a degree of stability as the economy went into meltdown.

This time Mugabe has declined to make confident predictions and has promised to stand down if he loses, although other Zanu-PF ministers insist that victory is certain.

Accompanied by his wife, Grace, and their children, he voted at around noon at Mhofu primary school near his former home in Highfield township. He emerged from a concrete classroom and waved his little finger coated in pink dye. Asked if he was nervous about the outcome, he told the Guardian: “No, no, no, I’ve gone past that. At 89?” The politician long accused of brutal authoritarianism by human rights watchdogs was confident of a credible election. “I haven’t got an account yet but I suppose they’re still gathering information. I’m sure people will vote freely and fairly. There is no pressure being exerted on anyone. So far, so good.”

He described the MDC’s claims of vote rigging as politicking, adding: “They want to find a way out.”

There has been speculation that, should Mugabe prevail, he will step down before his 90th birthday and hand power to one of his allies in Zanu-PF.

But asked by journalists if he would serve a full term, the president, bidding for his seventh straight election win, said: “Why not? Don’t you want me to serve the whole term? Why should I offer myself as a candidate if it is to cheat the people into resigning after?”

Other voters queued patiently at the school. Mugabe had support from Kelvin Mudzing, 23, an electrician. “Robert Mugabe is the only person who can stand for us. We’re the younger generation and we need someone with the sense of where we’re coming from. We should keep him as long as he’s willing to serve.”

But as in much of Harare, the MDC is expected to win here with young voters demanding democratic change.

One first-time voter, 24-year-old James Hanoki, had arrived at 3.30am to make sure he cast his ballot; he was 32nd in the queue. He voted at 7.40am. . “I’m feeling great. I’ve managed to do what I’m supposed to do as a Zimbabwean to bring the change we need. I believe that democracy can come. I believe that we can be like any other nation that holds democratic elections.”

Wearing an Arsenal football shirt, Donald Mavhudzi, 28, a property manager, had queued for five hours before voting. “We really wanted to vote for change. Here in Zimbabwe they call us the born-frees. We didn’t experience the liberation struggle and for some of us it’s the first time to vote.

“The 2008 election was a bit tense. There was a lot of violence and people were afraid, but this has been peaceful so far and people are excited. If the playing field remains level today, I would say Morgan Tsvangirai will the election by 65+%. But nobody knows what will happen after the election.”

Casting his vote at a high school in Harare, Tsvangirai, challenging Mugabe for the third time, appeared less jocular than his opponent. He said he expected to win “quite resoundingly”.

There were 6.4 million voters in a nation of 12.9 million people. Mugabe refused to allow western observer missions, including one from the Jimmy Carter Centre, to monitor voting. But western embassies were permitted to deploy a limited number of diplomats to key districts. The African Union and southern African region also had thousands of observers.

The Zimbabwe Election Support Network, a coalition of non-government organisations, said it had observed the elections in “a calm and peaceful environment” but added: “It is regrettable that the voters’ roll remained unavailable, and this can potentially undermine the credibility of the electoral process.”