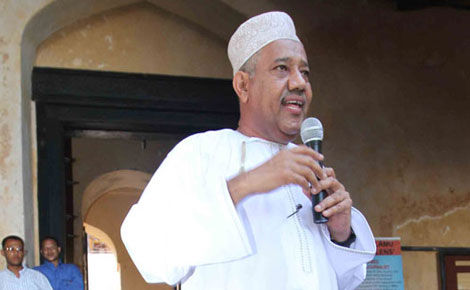 The Amani coalition leader called for a commission of inquiry to unearth the real culprits behind the violence that claimed 65 people. However, leaders from Coast were divided on whether the arrest was justified.

Mr Timamy was arraigned in court on Thursday. Police said he is being investigated for murder, forcible transfer of populations and terror-related offences. Ã¢Â€ÂœI want to reiterate that the arrest of Mr Timamy was rushed to cover up failures of the security officers.

The best way is to have a commission of inquiry to identify the culprits and the weakness of the security machinery and not use the Governor as a scapegoat,Ã¢Â€Â Mudavadi said.

Lamu deputy Governor Eric Mugo who accompanied Mudavadi, claimed his life is in danger after receiving threatening calls. Mr Mugo claimed he received some threats even before the arrest of the governor on Wednesday, addingÃ‚ some people in Lamu have started political schemes aimed at replacing current county government. Ã¢Â€Âœ

Some people have already started politics in Lamu. Even the before the arrest of the governor I started receiving threatening calls with some people telling me to resign,Ã¢Â€Â Mugo said.

He added: Ã¢Â€ÂœSome politicians want the county government dissolved. It is not time for politics; it is time to preach peace in Lamu,Ã¢Â€Â Mugo said. Mugo was baffled by the arrest of the governor even before the security agencies could conclude investigations

The Lapsset project has made some politicians to force their way into government without a proper election. There is a struggle by some people to ensure they are in control in Lamu,Ã¢Â€Â he said.