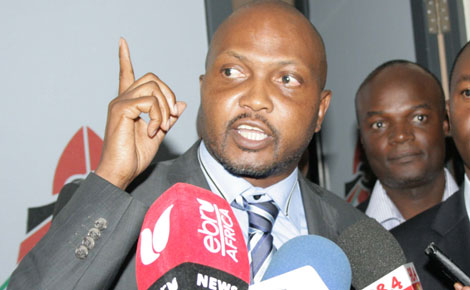 By Phil Wesonga
Uhuru’s Propaganda team must be popping champagne bottles for Hon. Moses Kuria – Gatundu South MP elect, but the truth is, Gatundu voters are the biggest losers, again! As they do not get to participate in a democratic process and their MP comes in with dubious record of a war monger and lead sycophant of Uhuru Kenyatta.

That aside, breaking Gideon Moi’s record as the second MP to be voted unopposed is not a good tag to carry. Remember young Moi was forced to pay off five of potential opponents Ksh30million each lumpsum which then translated into an MP’s monthly salary of Kshs 500,000 that each would have earned in the entire 5 year period! Just how much have “friends of Moses Kuria” paid to all this potential opponents including the widow of the late MP?

TNA emerges here as the most undemocratic ruling party, one that is afraid to conduct internal nominations and one that has allowed political intimidation and bribery within its rank. Talk about tyranny and corruption! These are unsustainable strategies and those that ultimately undermine Kenya’s fledgling democracy.

What scares me most is that no less a person that the deputy president came out and publicly admittted Kuria was being roped into the intellectually-challenged Jubilee parliamentary bench, NOT to represent the interests of Gatundu South but to “keep CORD in check!”. No no, am not scared of Kuria, am just afraid for my country. KANU is trully back with this unopposed business. Whats, next, mlolongo or single party dictorship?