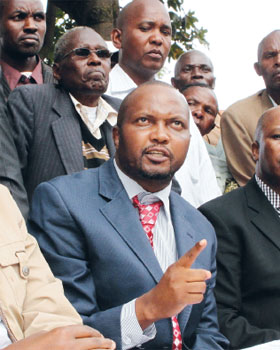 That Moses Kuria is a super TNA strategist is no doubt, he by just a stupid Facebook Post diverted the debate on social media from that on TRIBAL appointments by H.E Uhuru Kenyatta to something completely different- the grenade attacks that seem not to emanate from the Alshabaab BUT from a well coordinated source which many now allege is somewhere in Kilimani area!

Last week the clouds were thick and ready for what could have been a heavy downpour on Uhuru; tribalims, cost of living, unemployment, corruption and unexplained insecurity were the major drivers that saw Uhuru pull down a Facebook post where he was chest thumbing how he had appointed a Dr Githinji to head the National Youth Service replacing a career civil servant Jasper Rugutt.

Well, Moses Kuria managed to make us all look stupid, he diverted our focus to discuss bigotry.

Here are some of the comments that buried Mr Kuria online;
Wakake Otieno “Moses Kuria, choices have consequences. We decided to go East because we didn’t need the west. Why complain when the west doesnt need us? We didnt need them remember. Covering the governments failures by calling for civil war.. Cheap.. Cheap cheap.. Cheap… Cheap.. The governhttps://www.kenya-today.com/wp-admin/edit-comments.phpment is failing. Protecting Somalias in Somalia and not able to protect us at home… Failed.. Civil war? To protect a failing leadership”

Okaloluoch Tno “We have heard of them kil one another 4wealth. West gate to get sympathy, gikomba to get sympathy has backfired. While u talk shit, pple are dying. We know where ua greed is taking u. Just go on.”

Chris Maina “It is alleged that the grades are being launched by special forces, are by any chance the brains behind the bombs”

Patrobas Ojwang’ “Youâ€™ve just proven that you are a stupid fuckin kikuyu from the gatundu who dont know shit about the world around urself. Kikuyus are not the only people in this country who are affected by these acts of terror, you fuck! Grow some brains before u start spoutin nonsense, U are just proving the fact that once again youâ€™re probably the least inteligent people on earth, Fuck you redneck, ur Patriotism fails u in every way, if u keep acting like this more and more will h8 u, wanna kill you twice as much as you wanna kill people of other cultures and backgrounds, So once again Fuck u wannabe HITLER!”

Silfanos Ombajo “General kuria what are you waiting for ? start the killings. It took Rwanda hut us 100days to kill 800k Tsusis. How long will it take to finish 5m Luos n 4m Somalis? Hope you won’t find us unawares this time unlike in Naivasha”

Kenneth Ondigo i think our govt is one of our perceived terrorist. our intelligence has completely failed. we allocate more resources to our first lady’s comfort than we do to our security organs fighting terrorism. when terrorist are cornered at west gate by recce squad,the army comes from nowhere to prolong the effect of the terrorist. and you have the audacity to put the blame on any one?

Here is Moses Kuria’s post that called for civil war in Kenya, of importance are the comments that were posted. Follow the tyranny of insults on Moses.