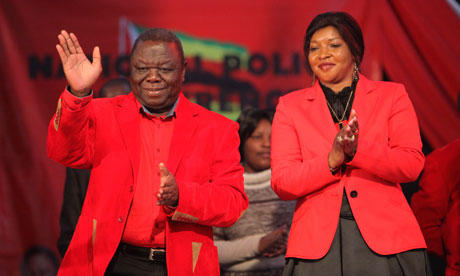 By Osugo Moseti in Harare Zimbabwe for KT.

No frills unionist Morgan Tvangirai; a friend of our own Father of Modern Democracy in Kenya Raila Odinga is commanding a comfortable lead with old Mugabe trailing behind. Mugabe is a friend of Kibaki and Uhuru; and by extension all those who ascribe to the Jubilee dishwater thinking of ‘showing the West a middle finger’.

According to provisional vote count in Zimbabwe; Prime Minister Morgan Tsvangrai is ahead with slightly over 52%, followed by Robert Mugabe trialling with 44%.

In elections that has left citizens questioning the ‘existence’ of GOD (here on earth); a distraught Movement for Democratic Change supporter was quoted by BBC as having wondered:

”EITHER GOD IS ON MUGABE’S SIDE,OR THE PRESENCE OF MUGABE IS A PROOF THAT GOD DOESN’T EXIST”. A question which I heard a lot around March 4; though with different names.

The head of African Union observer mission has so far qualified the elections as “free and fair” as other regional observers praise the peaceful nature of the elections.