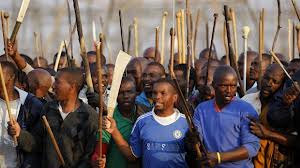 Nosisieko Jali’s husband is missing. She has heard a rumour that a bullet hit him in the head, yet he survived. One witness said all his clothes were torn. “I don’t know where he is,” said Jali, numb with anxiety. “The hospital wouldn’t let me come inside. I am hurting.”

Jali is among scores of wives at the Lonmin platinum mine in Marikana still waiting to discover if their husband is in a jail, hospital or mortuary after one of the bloodiest days in South Africa since apartheid.

Thirty-four people were killed and 78 injured on Thursday when police with automatic rifles, pistols and shotguns opened fire on the strikers, many of whom were armed with spears, machetes and clubs as they demonstrated for higher wages. The shocking images, beamed to TV viewers around the world, provoked comparisons with massacres by the white minority regime of the country’s past.

On Friday, next to the killing field, wives took the place of their dead and wounded husbands to stage an angry, emotionally charged demonstration. The women raged against police brutality, mine exploitation and a lack of official information that has left them agonisingly in the dark.

“How can we know whether people are dead or missing?” demanded Nowelcime Bosanathi, 35. “My husband went to the protest with a stick. I worried he might be dead. Then he called last night to say he’s in a police van and he doesn’t know where he’s going. Now his phone is on voicemail.”

Waving sticks, whistling and ululating, the women performed the apartheid-era toyi-toyi dance up and down a dirt road. They sang songs, some mournful, some defiant, warning: “When you strike a woman, you strike a rock” and invoking the memory of heroes of the anti-apartheid struggle such as Oliver Tambo. They joined hands in a circle for a soulful rendition of Nkosi Sikelel’ iAfrika, the national anthem and originally a hymn. They kneeled before police armed with shotguns and sang “What have we done?” in the Xhosa language.

The group of about 100 women also brandished homemade cardboard placards with handwritten slogans condemning the police. “Police stop shooting our husbands and sons,” one said. Another, referring to the new national police commissioner, Riah Phiyega, read: “Piega you celebrating your position by blood of our families.”

Primrose South, 51, was still waiting for news about Mishack Mzilikazi, 35, who lives on her property and is considered part of the family. “I last saw him at 8am on Thursday. He was going to work with his phone but now it’s off. He also had a stick and he was quiet.

She added: “We are feeling bad because the children now are crying, are hungry, are afraid even to sleep at night. The wives have no husbands now. Their husbands are lying dead in the forest.”

Whatever did happen here there is no shortage of blame â€“ and competing accounts. The women point at the police and the Lonmin mine management.

South, who works as a mine store manager, said: “The management sent the police to kill our husbands, brothers and sons. But we will fight for our rights like them.”

Many of these women followed their husbands from Eastern Cape province or neighbouring countries such as Lesotho, Swaziland or Zimbabwe. They live in the nearby Nkanini settlement in cramped shacks with pit toilets and an intermittent water supply. Above one of one of the world’s richest platinum deposits, goats wander in adjacent scrubland strewn with discarded plastic bags and rubbish.

They denied that the workers had opened fire first and said a turf war between rival unions was a sideshow to the dispute over pay.

The unions are scrapping for members. The National Union of Mineworkers, a supporter of the ANC, had signed up to a pay deal with Lonmin. But the militant Association of Mineworkers and Construction Union (AMCU) rejected this and pushed for wages to be trebled. This comes amid a wider debate on whether the governing African National Congress (ANC) should curb mine owners’ power.

The youth league of the ANC argues that nationalisation of the country’s mines and farms is the only way to redress the injustices of the past. The youth league said: “South Africa’s exploitative mining regime, capitalist greed and the poverty of our people is the cause.”

For its part, Lonmin announced that it would provide support to all the families that have suffered loss this week. Simon Scott, its chief financial officer, said: “We have established a help desk at Lonmin’s Andrew Saffy Hospital, which will help families with the identification of bodies, assist with all the burial arrangements and offer bereavement counselling.

“Lonmin commits to provide funding for the education of all the children of employees who lost their lives. This funding will cover education costs from primary school to university.”

The company’s London-listed share price slumped 9% early yesterday, though it ended 1.3% down at 639.5p. It plunged to a nine-year low on the Johannesburg exchange, where it is also listed.

The South African Institute of Race Relations called for the immediate suspension of all police officers involved in the shootings.

It said: “There is clear evidence that policemen randomly shot into the crowd with rifles and handguns. There is also evidence of their continuing to shoot after a number of bodies can be seen dropping and others turning to run.

“This is reminiscent of the Sharpeville massacre in 1960,” it said.

The police, though, insisted they acted in self-defence, arguing that the mine workers even possessed a pistol taken from a police officer they are alleged to have beaten to death on Monday.

At least 10 other people were killed during the week-old strike at the mine,80 miles north-west of Johannesburg, including two police officers said to have been battered to death by strikers and two mine security guards.

It was into this highly charged atmosphere that President Jacob Zuma stepped, having cut short a visit to a regional summit. He announced that a commission of inquiry would be held into the tragedy. “This inquiry will enable us to get to the real cause of the incident and derive the real lessons too,” he said during a visit to Marikana.

“We’ve all been saddened and dismayed by the events of the past few days and hours around the Marikana mine. The loss of life among workers and members of the police service is tragic and regrettable.

“These events are not what we want to see or want to become accustomed to in a democracy that is bound by the rule of law and where we are creating a better life for all our people.

He continued: “The events of the past few days have unfortunately been visited upon a nation that is hard at work addressing the persistent challenges of poverty, unemployment and inequality.

“We undertake this work in conditions of peace and stability, working with all sectors in our country.

“We assure the South African people in particular that we remain fully committed to ensuring that this country remains a peaceful, stable, productive and thriving nation, that is focused on improving the quality of life of all, especially the poor and working class.

“It is against this background that we have to uncover the truth about what happened here.”

He went on: “Today challenges us to restore calm and share the pain of the affected families and communities.

“This is not a day to apportion blame. It is a day for us to mourn together as a nation. It is also a day to start rebuilding and healing.”