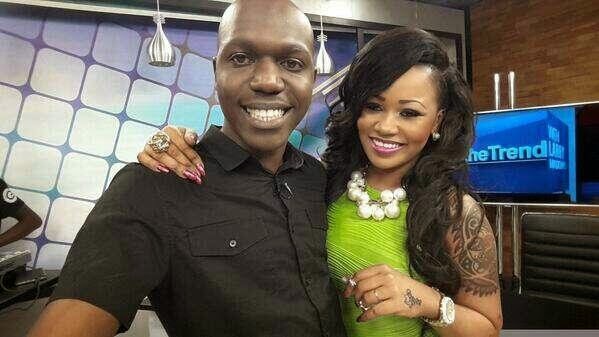 No publicity is bad publicity.

With this in mind, a local woman known only as Vera Sidika, with the assistance of NTVâ€™s Larry Madowo, proceeded to rearrange reality and embroider the truth on national television, leaving a few with their formed words unspoken as their jaws dropped open, and many wondering whether her cunningly mounted fantasies hid ultimately a wisdom or a lunacy.

Vera Sidika revealed that she has turned into a freakish parasitic species, Homo socialitis, that forms precarious symbiotic relationships with men. Among her victims includes a Nigerian man who gives her money to invest in all-fake-everything, for the rights to â€œget a good oneâ€.

She said this new species, Homo socialitis, is characterized by extravagant spending, using 50 million to bleach her skin, 150 thousand to buy fake hair and, an undisclosed amount to fake her age. Vera, who was 27 in 2007 says she is now 24 years old (in 2014) making her the oldest 24 year old in history of mankind, defying reality, nature, science and simple arithmetic.

â€œNairobi is a city with more eager girls per acre that any other city in Africa. Young women are giving China stiff competition to produce fake goods as the line between pretty girls, bootylicious girls, and droves of restless girls who come to Nairobi to be intoxicated, stripped, to wake up one morning in a strangerâ€™s bed, gets blurred,â€ one prominent political commentator said during an interview with I-Blurb.

Vera, the local woman, quickly disillusioned Kenyan men, calling them unromantic because they only want â€œa good oneâ€ but do not want to finance fake beauty as Nigerians (apparently) do.

â€œI have admiration for the girlâ€™s skill at improvising reality. I swallowed her story, especially about her age, but it lay queasily on my stomach,â€ on cynical Kenyan man said. â€œBut I am convinced that silliness and intelligence are not incompatible,â€ he added.