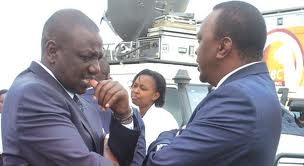 The Jubilee Celebration leader, Uhuru Muigai Kenyatta and his associate, William Samoei Kipchirchir Ruto are men without sleep on their eyes in todayâ€™s Kenyan politics. They danced it out on their Jubilee Day at Afraha Stadium, Nakuru and slept for two nights. When they woke up in the second morning, a strange storm beat their eyes taking away sleep and denying them the natural rest. That is sorry state of the matter in the lives of the President and Running mate of the Uhuruto Alliance. They have panicked.

There is time and chance

Since Kenyans view Uhuru as a man with magnetic hands, it is not reading well to see him panic as early as now. There is still time and chance for him to amend his strategy and stage up a forceful bid for presidency, especially, if he has genuine ambition for leadership of the nation. He can assemble his arsenal, reorganize his team and strike the target. If he does it effectively he will see reverse on his rivals.

Although it is judicious to agree that his chief opponent, Raila Amolo Odinga of Cord Alliance is a discreet veteran of Kenyaâ€™s politics, Uhuru has no reason to panic. He merely needs to do what he has never done over the season: wear gumboots and set off on votesâ€™ search across terrains of the country. Sitting pretty on an auctioneerâ€™s table or going around in his Central Kenyaâ€™s motherland with intimidating threats will not help him. He is still a young man who can exploit his power in exhaustive campaign trails. That is how Raila has managed to gather the nation behind him. He goes to the people, listens to them and talks back.

Uhuru should avoid faith that money can buy enough brigades to help him fight his battles. As he realized in the recent past, he is actually empty. His banking on tribal votes merely serves to press his back on the walls of President Mwai Kibakiâ€™s 2007 when he had to force results. That is not the way he should go. It took him to a criminal court that currently adds injuries to his conscience. He cannot be thinking of how to steal elections or force results â€œby any meansâ€. He can avoid it by believing with Kenyans that shrewd campaigns bring about proud results.

Play it with gusto and taste

Uhuruto should also reckon that Raila is a heavy weight in politics. That is when they will know what efforts to exert and how to realize results. Assumptions must be avoided because they may beas misleading as they have just realized. There is enough time for campaigns. They can catch up with him if they offload excess baggages which include games of mischief. Tribal messages are evaporating fast and becoming Kenyansâ€™ enemy number one. They can play it with fresh youthful gusto and taste knowing very well that The Cord Team are astute players of the game; people with true touch on the masses.

Uhuruto may bank on Kikuyu-Kalenjin numerical for victory. They may also want to string in Luhyans through Wycliffe Musalia Mudavadi or hope on Rutoâ€™s magic of YKâ€™92 when, together with Cyrus Jirongo, they resuscitated a suffocating Kanu. All these may not bring about results today. Kenyans have moved a bit forward. Only a popular â€œyouthfulâ€ approach will excite their targeted heap of votes in the elections.

The man with the bulk of headache in Uhuruto is Ruto. Even though he is sitting on piles of notes after spoils of Uhuruâ€™s Kenya Shillings, Ruto is a worried man. Firstly, he is struggling with questions:- How will I face the people of my community after ignoring their pleas to team with ODM?! How will I face Uhuru after failure to help him win presidency?! What can I do to restore the silhouetting confidence?! Endless questions!

Ruto and Mudavadi may be lost in thoughts because they have no options. The two men are readily reminded of the money they have squandered in the time. The giver is not a philanthropist. That is the reason why Ruto cleverly roped in Mudavadi; when they share the headache it gets less. Furthermore, the latter has a graveyard case on his back. This makes them part of the baggage that make Uhuru sick.

But the son of Jomo has no much to worry about it! In politics you can gain or lose. Since gaining is the ultimate prize, let Uhuru re-brand his campaign team for national outreach. Kenyans are missing him.