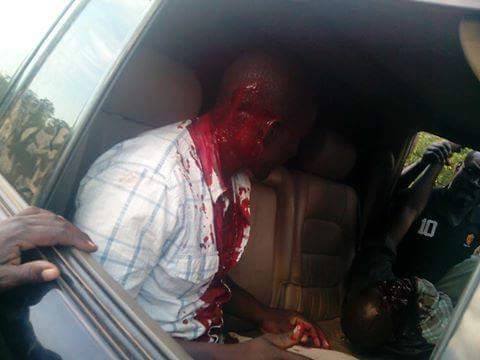 We decided to change route such that instead of using Olare – homabay route, we opted for Olare-Rangwe-Rodi route. When we reached Olare, the reception was good, despite a few hecklers who were stationed away from the venue in some samba. We ignored them. We didn’t know they will start stoning our cars as we left.

From the way they operated, they had specific instructions on who to stone. The God I serve protected me from a huge stone that missed my window (see pic). The other stone was directed at Mbadi car, hurting one lady badly, Gladys Wanga car, though nobody was hurt.

These two gentlemen we also targeted. She was hit from behind at close range from where he was taking his soda. The other guy was hit at the mouth by a guy standing next to him.

We thank God our team managed to restrain themselves. The language now would be how many casualties. But since we knew their plan, we avoided that route. They wanted people to die and blame it on men in black.