Lawyer Ahmednasir Abdullahi has unleashed a scathing reply to Interior Cabinet Secretary Joseph ole Lenku, terming claims that he defamed him as â€˜nonsenseâ€™.

Abdullahi in a letter addressed to CS Ole Lenku’s lawyer Donald Kipkorir says he stands by his tweets/comments he made against Lenku.

1. â€œThe content of the said letter and more so the demand herein is utter nonsense.â€

2.I stand by, justifiable every word of what I twitted (sic), he lashed out.

He went on to poke holes at the alleged defamation of Lenkuâ€™s character, saying Ole Lenku had no reputation to protect;

3. â€œWhat reputation or character are you talking about?â€

4. â€œWhat hatred, ridicule or contempt are you talking about? To quote the now famous words of American owner of Liverpool Football Club, â€œwhat are you smoking over there?â€ you seem not to know that much about the minimalist and dwarf standing of your client among the Kenyan society,â€ Abdullahi said.

Lenku had demanded an apology from Abdullahi for linking him to alleged land grabbing and wanted him arrested and charged for using social media criminally.

5. â€œAs for the demand you make, you must be kidding,â€ Abdullahi replied.

Earlier on Tuesday morning Lenku gave Abdullahi 24 hours to retract the damaging claims on Twitter linking him to land grabbing.

Lenku lodged a criminal complaint against Abdullahi with recommendations that he be arrested and charged for misuse of social media.

The letter was copied to the Inspector General of Police and the Director of Public Prosecutions, Solicitor General Njee Muturi and CID Director.

Some of the tweets according to the demand letter say: â€œWhere does one turn to when the Cabinet Secretary in charge of Security Ole Lenku storms and takes over your land ala Mugabe style.â€

Abdullahi has accused Lenku of deploying GSU officers to disputed land with intentions of grabbing it.

â€œYesterday and today ole Lenku with 500 Maasai warriors and 75 GSU officers took over by force Nguruman farm. He arrested all 76 workers.â€

â€œOle Lenku is doing this because the farm is part owned by Kenyans of European descent. He called the owner and told them he will deport him.â€

He went on to say: â€œThis is what happens when a doorman in a 2 star hotel becomes in (sic) Cabinet Secretary in charge of his nationâ€™s security.â€

Lenku in the letter argues that the posts display him as a person who do not understand or respect law among nine issues raised.

â€œIn using the said words, on their natural meaning, you meant and was understood to mean that our client (Lenku) is a criminal, unqualified to be Cabinet Secretary and is misusing police for personal gain,â€ it reads.

Here is AhmedNassir’s Letter, click to maximise for easy reading>>> 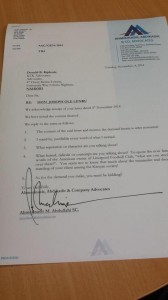 And HERE is Ole Lenku’s demand letter, click to maximise for easy reading>> 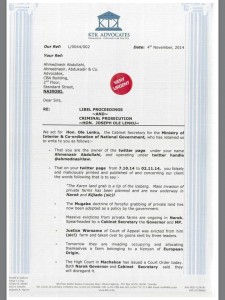 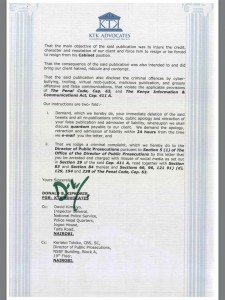