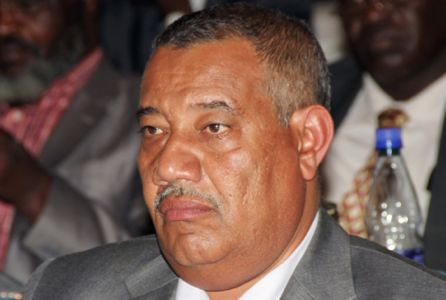 State has applied to detain Lamu Governor Issa Timamy for 14 days as it investigates him for international crime which includes deportation, mass murder and terrorism.

Lamu governor Issa Timamy was last evening arrested over the recent killings in Mpeketoni and Kibaoni in the county that claimed lives of over 60 people. Timamy had been in Nairobi for a meeting with Deputy President Ruto before he flew back to Lamu where he was summoned for questioning and later detained.

On Thursday, The Amani coalition protested the manner in which he was arrested and charged over the recent Mpeketoni killings that claimed more than 65 lives. UDF party leader Musalia Mudavadi in a strong worded statement said the government had acted in ill faith by subjecting the embattled governor to â€˜inhuman treatmentâ€™.

According to Mudavadi, Timamy, who was in Nairobi on Wednesday, was asked to return to Lamu and record a statement over the killings. He allegedly flew to Lamu and upon arrival, he was bundled into a police pick up and transferred to Mombasa, a journey that took over 8 hours before he was locked at the Kilindini Police Station overnight.