APOLOGY NOT ACCEPTED! THE ON AIR ERROR AND THE NAIVETY TERROR

For more than 15 minutes, a national TV station saw no need to correctly state, who is Kenya’s Head of State. From the start of the live newscast, a grossly misleading on screen graphic, was prominently displayed. The apology came much later, and its delivery was even more shocking. 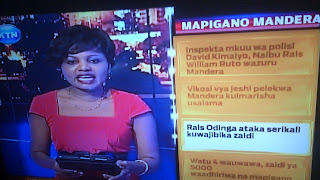 In the first instance, did the error completely elude the attention of the entire production and editorial crew involved in preparing this particular broadcast? And if one or more people noticed it, was there no way of raising the alert promptly?

And if the ‘little monumental’ mistake found its way on air, one would expect somebody would have detected it, simply because it was staring right back at whoever cared to look at it.

In spite of all the complexities associated with a live news broadcast, there is just no excuse for the attention to details and presence of mind elements to be so grossly overlooked.

But the clincher came, about 17 minutes later.

Somebody eventually realised something had gone wrong. And I can risk a hefty bet that the clue must have emanated from the social media circles.

Soon after, the news presenter offered the station’s apology, but almost as a by the way, matter of non-importance, needle in a haystack inconsequential serendipity…with a chuckle!!!

And that is why in my books, the apology is not acceptable! (it’s also negating the viewer’s intelligence by saying the error was a typo: ‘Raila’ and ‘Rais’ are at most distant cousins lexicographically).