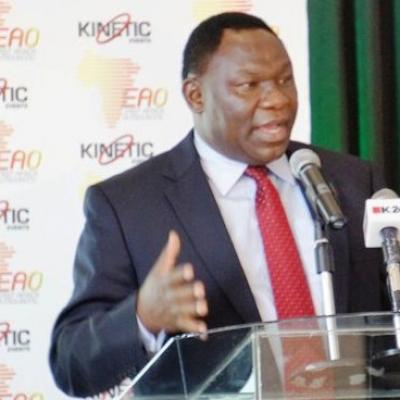 Kisii born renegade educationist-cum-informationist-cum apologist Bitange Ndemo’s downward spiral has eventually landed him in the dusty, dimly lit lecture halls of Kenya’s oldest university where he has finally been hired after summarily being dropped in the Jubilee’s well-connected but no merit needed technocratic cabinet.

Before fate and gods came knocking Bitange Ndemo’s door for eviction; he briefly defended William Ruto’s luxurious West Africa trip; however, he did not manage the radical impeachments still ongoing.

That Ndemo, a loudmouthed bureaucrat whose friend Muthui Kariuki also got internally fired, accepted to chew humble pie and join UASU (soon the former PS may be on the streets demanding BETTER pay) speaks volumes of the kind of government machinery currently in place. At the University of Nairobi, he will be teaching clueless freshers, some who only saw him on Television waxing lyrical about everything in general and nothing in particular.

As you all know, Ndemo could not be recycled in the government like, say Mutea Iringo or Joseph Kinyua, because he lacks the necessary DNA from the domestic animals endangered central region of this big republic. Kisii, where the current dejected former civil servant hails from, has been in the news for all the wrong reasons, including rejecting President Uhuru Kenyatta’s speech. Apparently, Ndemo’s less dramatic exit adds to the now well developed pattern of “replace them with our people” kind of firing, hiring and appointments on high gear in many segments of the government.

At the University of Nairobi, Ndemo, who may not even rise to the head of department level, will come face-to-face with hungry students whose HELB loans are as dwindling as the shares of KQ at the Nairobi Stock Market.

Whether he used to go to church or Sabina Joy, Ndemo, whose other name is Bitange, has entered the realm of human specimens future historians will use to study the other variables which the tyrannical numbers bequeathed on the good citizens of our no frills republic!

Prior to his appointment as Permanent Secretary, Dr. Ndemo was a Senior Lecturer at the University of Nairobiâ€™s Business School, where he taught entrepreneurship, management and research methods.Â  Most of his research work centres on Small and Medium Enterprises in Kenya with emphasis on Social Enterprise.