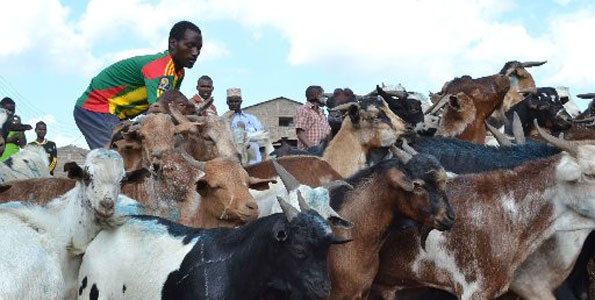 KIMALEL GOAT AUCTION: This actIvity which was famous in the 1980s is being introduced back. Around Christmas; Moi, Barng’etuny (late), Saitoti (late), Kamotho (retired), Kalonzo (CORD) and other former KANU warlords used to congregate in Baringo to buy goats in the traditional way. These goats would be used for X-mas celebrations.

Now, somewhere in this wild wide web, officials of Baringo County has lined up this traditional activity as one of the “economic ventures” to pull people out of poverty. It may shock you that the man who shall open the whole thing is Mr. Uhuru Muigai Kenyatta, President of Kenya.

My friends, there was nothing ‘digital’ in Jubilee. These people want to use the economic knowledge of the 20th century to run a government in the 2nd decade of the 21st century.

Kimalel Goat Auction cannot turn around the absolute penury in Baringo and elsewhere in the Rift Valley. Make no mistake. Swaths of Kalenjins are poor. Moi’s 24 year rule was costly to everyone. A kilometer away, we were treated to the shock of school girls using feathers as menstrual towels.

Now, there was another rumour. They used to say Rift Valley was the bread basket of Kenya? Hahahaha. How? Which Kenya? I grew up in Nyanza and never did I see these ‘baskets full of bread’ from the Rift Valley.

Now the Kalenjins must keep quiet for the next ten years. OMG! Prof Rostows calls it ‘delayed take-off’.

The gist of this post is that Kimalel Goat auction is more of a political propaganda than an economically viable activity. But I must congratulate the Kalenjins on one thing: Greenhouse farming and proper dairy farming. There is also commercial wheat and maize farming. With these, they have managed to educate more of their people so easily than their Luo neighbours.

Meaning, more Kalenjins are abandoning the herd (of goats) mentality to a life in white collar environments. This is good progress. Honest Kalenjins thank Moi profusely. He inherited a community that was animalistic in the 70S and turned their fortunes around.

It is true. So what is the issue? The issue is Kalenjins are educated now. Many are entitled to employment. When you see Alfred Keter fight for employment of his people. He is not just heckling. Jubilee promised Kalenjins jobs. . .so it should deliver. You see, when Kibaki got in power in 2002, he (plural GEMA) begun a systematic expulsion of Kalenjins which started with Sally and ended with I don’t know who. Raila would briefly rescue them in 2007 and re-employ most of them. They would rebel and bolt out.

I know you will be quick to ask me: “But DD, how about your community? The Luo?” I will answer you with a fist: “No worries, we are regrouping!” LOL!