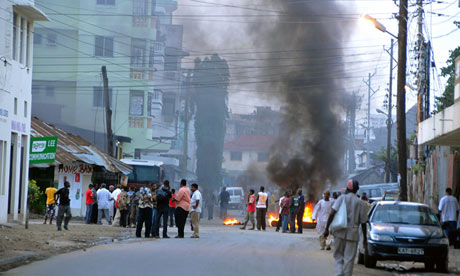 Hundreds of protesters smashed cars and torched churches in Mombasa after unknown gunmen shot dead a Muslim cleric accused by the US of helping Islamist militants in Somalia.

One protester was killed in the riots which erupted after Aboud Rogo Mohammed was shot, as youths from the port city’s large Muslim population took to the streets saying he had been deliberately targeted by police.

“It’s an attack on Muslims, and we will not take it lightly,” said Suleiman Atham, one of the protesters.

“Unknown gunmen attacked his vehicle â€¦ sprayed it with bullets and killed him on the spot,” Kitur said. “They must have been targeting him, and must have been trailing him for a while.”

Protesters set alight a government vehicle and stoned cars along the main highway linking Mombasa to Mali, both popular tourist destinations, and burnt tyres to block the road.

Chanting slogans in Arabic, they smashed windscreens and headlamps while others looted shops in the city.

Police fired rubber bullets in the air and teargas to disperse the protesters. One protester was killed after being hit by a stone on his head, Kipkemboi Rop, the Mombasa area police chief, said.

Later, many shops were shuttered and streets usually thronging with shoppers and foreign tourists were deserted as many barricaded themselves indoors.

According to police, Rogo was arrested with firearms, ammunition and detonators in his house. He was accused of planning acts of terrorism.

Washington has also imposed sanctions on financial transactions by Rogo over his alleged links to al Shabaab, and on five other individuals.

The US and other western powers have been backing efforts to crush al Shabaab, which remains in control of large parts of central and southern Somalia despite the presence of African Union troops and military action by both Kenya and Ethiopia.

Police denied any involvement in the attack on Rogo, in which his wife was wounded.

But protesters said they believed police shot him deliberately. “These are police who have killed our innocent Sheikh. They have shot him dead. They imposed on him terrorism charges, arrested and charged him, now they fear the court will release him, and have decided to end his life,” said Athman, one of the protesters.

The Muslim Human Rights Forum called it an “extra-judicial killing” and demanded an investigation.

“Sheikh Rogo was assassinated this morning … in an incident that mirrors recent others targeting people who were on the country’s terrorism watch list,” it said in a statement.

The rights group said another Mombasa-based Muslim preacher, Samir Hashim Khan, together with a blind colleague, Mohamed Bekhit Kassim, were abducted in April, and Khan’s badly mutilated body was found dumped at a national park near Mombasa. His colleague’s whereabouts are unknown.

Relations between Christians and Muslims have been relatively good in Kenya, and police chief Rop said he did not believe Monday’s rioting would escalate into communal violence.

“The youth were acting on impulse. It has nothing to do with long-standing misunderstanding or disagreement because there has not been any,” he said. “So we don’t expect this to go on after today. But if it happens, we have enough officers on the ground to contain it.”

A Muslim cleric described the attacks on the churches as “a spontaneous reaction”.

“The Muslim youth who attacked those churches must have been thinking that the only person who killed Rogo was a non-Muslim and the immediate non-Muslims to them are the Christians. I see the attack as misplaced revenge,” Sheikh Juma Ngao said.

Tourist operators said they feared the violence could hit their business.

“It is too early to tell, but already the demonstrations are not good for us. They send a negative signal â€¦ violence is dangerous for our tourism,” said Mohammed Hersi, who runs the Whitesands Hotel, the largest resort on the coast, as well as an association that acts as an umbrella group for tour operators.