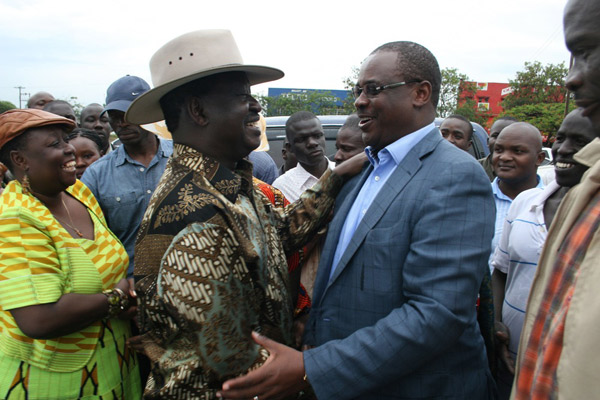 The past few days have seen fever-pitch exchanges of political vitriol on social media regarding Harambees. Unfortunately, as is often the case when political barbs are traded, misinformation is traded for the truth. I’ll attempt to set some of this right in my missive.

First, it’s often put forward by Raila Odinga’s political opponents that he bears responsibility for the poverty plaguing the people of Kibera and indeed, Luo Nyanza in general. The assertion made is that politicking driven by the Prime Minister is responsible for the lack of development in the aforementioned areas. Some even go further, alleging that Raila Odinga has somehow put it in the minds of his political supporters that development cannot be achieved without him at the helm.

Let’s tackle each of these fallacies one by one. First, the primary role of your Member of Parliament is representation and legislation. Your MP is responsible for representing your views in the August House. Your MP does not collect tax. That is done by the Executive and as such, the Executive bears the ultimate responsibility of actually implementing development programs. This is not to say that Raila Odinga did not do his bit in his private capacity to see the lifestyles of the people of Kibra uplifted; little is said of the Raila Odinga Educational Center that has a student body of over 2,000. This Center not only caters to the education of slum resident children but their meals and sanitary towels for girls as well.

Let’s go further into this issue of slums. There are 88 slums in Nairobi alone. Kibra is but one of them. Is Raila Odinga responsible for all? What is the root cause of the proliferation of slum dwellings? We must examine the role of legislators keenly and place responsibility where it rightfully belongs. Successive Governments have failed slum residents by failing to tackle poverty and job creation, not MPs. It’s important to note that despite the lack of goodwill by previous and the current regime, it was during Raila Odinga’s tenure as Prime Minister that the slum upgrading program in Kibra was initiated that saw thousands of families relocated to low cost housing.

The national Government is failing Kenyans, not Raila Odinga!

Secondly, let’s put Luo Nyanza in context. A lot has been said regarding poverty in Luo Nyanza. I put it to you, the reader, that poverty is not the exclusive preserve of this part of the country. Kindly refer to the Kenya National and Demographic Health Survey (available on the Kenya National Bureau of Statistics website) and you will find that over 60% of Kenyans are living on less than a dollar a day. So poverty is widespread, even in areas that haven’t traditionally supported the Movement that Raila Odinga leads. In North Eastern Kenya, illiteracy among women in this day and age stands at 98%!!! Is Raila Odinga responsible for that or is it the National Government that has failed? In Kajiado where I work, less than 26% of children actually complete primary school. What of alcoholism? Cattle rustling? Female Genital Mutilation and other indicators of economic empowerment? Are these highest in Luo Nyanza?

Thirdly, to address this issue of Harambees. I fully support communal effort to tackle economic challenges; education, illness, funeral expenses and so on. I contribute to these whenever I can. However, I do not pretend to assert that this is the route to economic emancipation! There is not a single country in the world that has moved from third world categorization to first world categorization on financial aid, not a single one. And the same goes for individuals; Harambees create a culture of dependency that eliminates creativity. People view “wakubwa” as the only way to financial independence failing to realize that Mkubwa will never give you enough for you to live the rest of your life. This form of patronage is designed to keep the electorate needy and dependent on the goodwill of an individual. Is this true economic freedom? Is this really development? A true leader will teach a man to fish and not just give him fish; it was written!

This is what a Raila Odinga Presidency represents, a fair chance for everybody to earn an honest living and a fair wage. A Raila Odinga Presidency is meant to free you from the shackles of dependency not keep you tied to an individual. Surely, why should we raise money to build roads and yet we pay tax? As a matter of fact, we even pay 16% VAT extra now! What is the National Government doing with all that money???

Lastly, the allegations that Raila Odinga is stingy is simple baseless and false. The Bible says, “when you give, do so in a manner that leaves your left hand guessing as to what your right hand is doing!” It is not in Raila Odinga’s nature to send press releases whenever he helps pay somebody’s fees or meet a relatives funeral expenses. However, I am not so modest; I have personally felt his generosity in my life in a life changing manner! Some people have even said that he’s never been seen at a Harambee!?! Who has kept Gor Mahia and AFC going for the past few years through their economic doldrums? Who has single handedly been sponsoring the Harambee Stars year after year? Who paid Martin Shikuku’s funeral expenses? Who built Mukami Kimathi’s (Dedan Kimathi’s widow) house? Who took Governors to the United States where some came back with investments of up to 500 Billion shillings over ten years for their Counties? Who visited Hon Yusuf Hassan in hospital when he almost lost both his legs in a terror attack? Who paid for President Mwai Kibaki’s treatment in London following his car crash in 2002? Is this a stingy man?