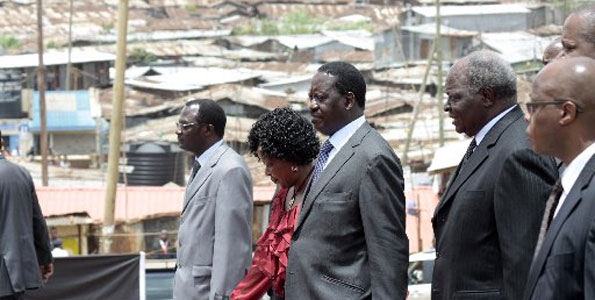 Social media has lately been abuzz with a number of anti reform hoodlums attempting to politicize the Kibera slum. A little education will suffice; we need to look at the issue with the open mindedness it deserves without polluting it with our poisoned tribal leanings and soiled political ideologies. Poverty is no joke, and anyone trying to seek mileage out of poverty is as poor in thought just as the Kibera dwellers are poor in material things.

1. A slum is not a creation of an individual; it is a creation of a poor economic system that does not adequately reward those that are not at the top of the model, as such no one individual can pretend to cure the slum problem not even superman in all his splendour can.

We have a role to play in instituting just economic principles that allows the wealth of the country to trickle down to the last, the least, the low. Why should the wealth trickle down? It s simple, in Kenya the wealth is created bottom up, the people who work hard end up with nothing.

We should start discussions on what is a just wage, all other issues considered like GDP and economic status, Manual labourers in developed countries are paid very well sometimes better than even people in offices, and this is the only reason the west has a bulging middle class, skill is rewarded, hard work is recognized, no one left behind, the cook, the mason, the plumber, the electrician are all incredibly useful to the economy and are rewarded as such.

2. Every major city around the world has a big slum, it is the slum dwellers who build the cities, Rio de Janeiro has the Favelas, Bombay has the largest slum in the world – Dharava, Johannesburg with all its diamond and Gold has Soweto, America hosts the dilapidated Detroit, London houses the impoverished East London, Mexico has Neza-Chalco-Itza, Pakistan has Orangi town, it is ironical that those who are the wheels and the hands of the cities live in slums. Why is this so? There are a myriad of issues, one it has to do with our human beings affinity to sky scrapers and lights, growing up we all looked forward to the day when we visit the big cities, they are exciting and full of life, and it is in each of us if not many of us to live in big cities, once we graduate from universities we all head to cities, once we donâ€™t find jobs we all head to the slums to ‘survive’!

We cannot wish away slums, they are here to stay with us,Â  the best we can do Â is make them habitable to acceptable levels, sanitation cannot be legislated it can only be encouraged, short of giving them money Raila has very little else to do other than improve sanitation and security, and this he cannot do by himself , in my opinion the president is more responsible for slums in more than a member of parliament, the slums can only be tackled and improved by all, if today all the slum dwellers were given houses, tomorrow there’ll be a million more new slums, the issue here thus is poverty for it breeds slums and provides the axis around which social ills of drugs, criminality, prostitution and gang life rotate about.

3. I admire Raila for choosing to vie in Kibera knowing too well itâ€™s a hot knob, he would have played it ‘safe’ and vied in Bondo like his opponents retreated to Othaya, Gatundu, Eldoret North, and other safe havens, for that Hon Raila kudos. Rather than go for comfort in Bondo and win in advance for a lifetime, you came to the capital and entertained challenge, you’ve done it before sir, rather than allow more lead us into a one party state, you chose to place yourself on harm’s way, fighting for the tenets of democracy, while some hoodlums who shout loudly today were sitted on Moi’s laps.

4. Where you live does not determine your happiness, Iâ€™ve spent a lot of time in Kibera slums and my observation is quite surprising, rather than encounter a sad sorry lot, people in kibera are full of juice, full of life, they make up for their lack of material wealth with a genuine gusto for life, as such you lack two things in kibera; wealth and misery they are nowhere to be seen.

So, letâ€™s end this hypocrisy, we are the reason as a nation for having slums and entrenching poverty, we pay our nurses, doctors,teachers, house helps,security officers et el Â peanuts, in so doing we ensure they remain impoverished, while paying our MPS some of the highest salaries in the world.

We need a system which protects the weak from the strong and rewards industry justly. What needs to be done is not a shouting match between the haves and the have notâ€™s, a contest of words between the political right against the political left will never improve the conditions in Kibera.

It may be true Raila has spent most of his time and energy on national duty and has not adequately spent time on the ground, that said, Kibera is our national shame and we share the blame for an economy that rewards the lazy who doze in parliament while ignoring those who sweat in kibera, in Mukuru-kwa Njenga, Kiandutu slums in Thika and elsewhere.

For a more just Kenya we must inculcate a culture of rewarding talent and sweat, a domain where many slum dwellers exist.