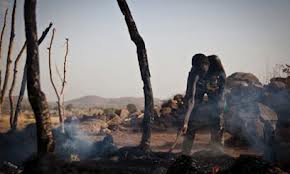 President Kibaki ordered a dusk to dawn curfew in the coastal county of Tana River following the killing of 38 people including nine police officers. The massacre was carried out in the earlier morning hours of Monday.

“The Government has … directed the declaration and maintenance of a dusk-to-dawn curfew among other measures… In the meantime, additional detachments of security forces have been sent to the area with immediate effect,” Â Â statement from President Mwai Kibaki read.

Hundreds of armed raiders killed 38 people and touched more than 100 homes in the latest of the revenge attacks pitting the Orma and Pokomo tribes in a dispute over land and pasture in the Tana Delta.

An eye witness who spoke to this reporter on phone said more than 300 armed raiders armed with spears, machete and guns surrounded and attacked a police post at Kilelengwani Primary School; in the attack nine police officers were killed. The raiders then attacked the Kilelengwani village where more than 29 villagers were massacred, and hundreds of livestock was lost in the raid.

Some of the dead had gunshot wounds, though majority were reportedly hacked to death.

Police are struggling to defuse tension between the two tribes have since arrested four local chiefs in connection with the violence.

Area Member of Parliament Danson Buyu Mungatana has called on the president to deploy the military to the area to lead disarmament. Mungatana asked the government to order security forces to comb the forests to flush out the raiders whom he described as an organized militia.

Tension between the two communities is not a new development, in the last three weeks alone more than 100 people have been shot, hacked and burnt to death in rounds of tit-for-tat.

The Pokomo are farmers with settled homes while the Orma are semi nomadic pastoralists. Â Tension is fueled the scarce resources often pasture, farms and water. Last month the Pokomo revenged an earlier attack by raiding an Orma village, 52 villagers were murdered.

The attacks in August led to the questioning of local Member of Parliament Dhado Godhana, after Kenyaâ€™s internal security minister accused him of fanning violence in the region, he denied the claims.

The Kenyan Red Cross confirmed the number of deaths from Monday morning’s attack on Kilelengwani village as 38 people, including nine police officers.

The attack on the police camp sent shock across the country and fears that the clashes are taking another angle, the local Kenya Red Cross has threatened to pull out from the area.

The area is awash with small arms mainly due to the influx of weapons across Kenya’s borders, in particular from war-ravaged Somalia and armed tribes from Ethiopia.

Despite the high potential in the region, the government has been accused of marginalizing the area; high poverty levels are blamed for increased social divisions.

Tana River County is in the coast province where the Mombasa Republican Council has called for cession of the region from the republic of Kenya, to date no links have been established between the revenge attacks and the MRCâ€™s quest.

Kenya goes into elections in March 2013, since 1992 the country has experienced tribal clashes during the campaign period often instigated by politicians. Many speculate that political incitement could be the hidden hand behind the revenge attacks.

Detailed analysis (by Kenya Today team) of the Tana River conflict will be published soon.