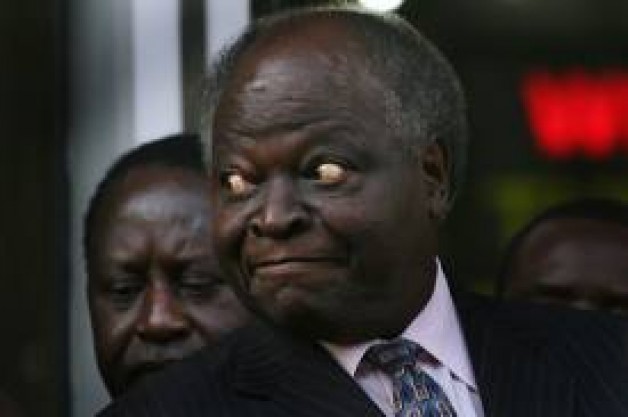 Former President Mwai Kibaki was recycled at University of Nairobi to give a public lecture which sounded like a Madaraka Day speech.

Long, boring, and written to only represent Kibaki’s 50 years of public service, the lecture was a long summary of ‘the good which came with Kibaki’. Yet Kibaki is also the man who moved in parliament the motion to abolish multi-partyism. Kibaki was with Mboya when sessional paper no. 65 was drafted; and this year, a truth commission found the paper a capitalist mockery of socialism. Lost in its length, depth and breadth are the very questions which members of the academia expected Kibaki to answer. Na alidinda!

Of the ten questions asked, Kibaki only directly responded to one. And even on this single question, based on personal life, Kibaki chose to vilify the questioner as using the ‘wrong logic’ to interpret life.

In his usual element, the rashness of an old man took over him, and he refused to totally engage the youthful scholars and members of faculty who interrupted normal university duties to listen to him.

On the question of writing down an autobiography, Kibaki refused to answer.

On the question of his take on media bill, Kibaki refused to answer.

On six other questions, Kibaki refused to respond!

In his speech, the lecture, Kibaki refused to touch on the 2007 violence and the Grand Coalition government.

Instead, the lecture revolved around 2002 ejection of KANU, the usual pep talk on infrastructure and free primary education, a thorough assault on devolution (majimbo) at independence and now as well as other Kibaki era niceties.

But Kenyans feel the history of the country as presented by Kibaki is a woeful misrepresentation; only serving to cement the positive place mandarins of the current state apparatus want Kibaki to occupy in the consciousness of the Kenyan citizenry.

The Lecture, while part of the Kenya@50 celebrations, is turning out to be a publicity gimmick of a government used to public hype and media craze.

It puts to question why a person chosen to give a public lecture, because of his supposed experience in the period in analysis, would chose to skillfully manipulate facts to fit into dubious historical happenstances, some of which are his own creation.

KIBAKI WAS AN INSIDER IN NYAYO ERA:
Guys, i think Kibaki should be the last person to criticize the administration of Moi Government. In 1982 Kibaki single-handedly repealed a constitution to make Kenya a de Jure state (a single party dictatorship). Kibaki once said that removing kanu was like cutting a mugumo tree with a razorblade. A clear testimony that Kibaki was not only a kanu youth winger but an errant boy during the administration of Moi regime. Kibaki had served as the second in command after president Moi for ten good years. He was also the Minister for Finance, Planning and National Development. Kibaki was appointed later as the Minister for Health a port folio which he served until he resigned in December 1991 to be a lamp bearer which was beaming a dim light. Its in fact quite unfortunate for Kibaki to fail to recognize the little contribution of President Moi over the entire 24 years of his leadership. History will also judge him (Kibaki) harshly over very many corruption and other ills which was the norm of the day over his ten years as the 3rd president of the republic of Kenya.

So the Taifa Hall lecture was just but an intellectual dishonest act. I call such jubilee vibes.