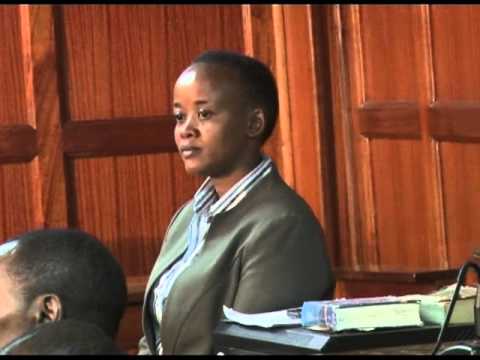 Prominent City Lawyer Kethi Kilonzo will tomorrow return to the Criminal Investigations Department (CID) headquarters were she will prepare for the charges the following day. She will be arraigned in Court on Tuesday to take pleas over a case in which she is being accused of forging electoral documents to run in last month’s Â Makueni Senate seat by-elections.

The lawyer who ably represented Africog in the Supreme Court petition of Raila Odinga vs IEBC and others last month saw her chances of becoming the first elected senator dwindle, and fade away after Jubilee Alliance accused her of forgery of electoral documents while she was ineligible to participate in the elections.

She is expected to appear alongside the IEBC officials who facilitated her unsuccessful registration. Meanwhile, CORD leader and former Vice President Kalonzo Musyoka has accused the Jubilee government of frustrating Ms Kilonzo because of her performance at the Supreme Court which sought to overturn the fraudulent elections where Uhuru Kenyatta was erroneously declared winner of the presidential vote.

Musyoka, like many Kenyans, believe Ms Kilonzo is a victim of a government still seeking legitimacy after bungling the last elections through a series of state orchestrated faults which ensured the veracity and verifiability of the last elections could not be ascertained. During the supreme court, advocate Kethi laboured vigorously to prove that the elections were a fraud; the same offense she is being charged with in today.

The Makueni Senate seat was won by her brother, Mutual Kilonzo Jr, who campaigned only for 4 days but thrashed the combined might of the Jubilee Alliance and their sympathisers like a brukenge!