Kalenjin nation supremo Deputy President William Ruto got a rude shock when Kericho Governor Paul Chepkwony publicly declared that he is for DEVOLUTION and that he will be supporting OKOA Kenya’s referendum initiative. It should be noted that majority of Rift valley residents who previously agitated for Majimbo are strongly in support of CORD’s referendum initiative. 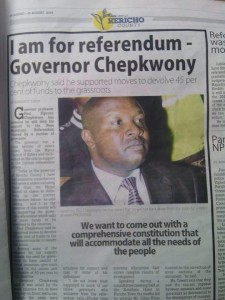 Despite William Ruto publicly stating that he is against the Raila Odinga led initiative, it goes without saying that the masses in Rift Valley who have majimbo dreams will definitely spring onto Odinga’s bandwagon.

Majority of governors from Rift Valley who have withdrawn from the referendum are said to be the worst WaterMelons ever as they are set for long night pro campaigns as spend their daytime bashing the same.