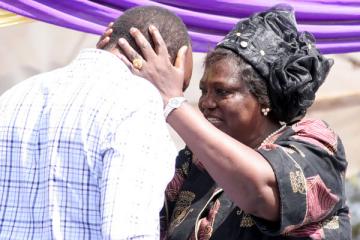 During the Presidential debate, Uhuru made the â€œwilling buyer, willing sellerâ€ remark (very insensitive to the majority poor) which has ignited debate and fire, testament that people are fed up with Capitalistic answers to historical land injustices at The Coast, Rift Valley and Central Kenya.

Uhuru must know that a key tenet of perfect competition is free flow of information. Kenyatta as President had superior access to land markets information than the other Kenyan willing buyers, he knew where land was available, and at how much.

He knew where land was available. He went there first, and hoarded the commodity in huge quantities. Other willing buyers got the message late and went but found the supplies had been hoarded via phone calls to PCs, DCs etc by Kenyatta.

Okay itâ€™s not Uhuruâ€™s commission, but his is an act of omission by not sharing the loot. 5 decades after the hoarding, he still sits on the commodity. His land is still home to squatters, who are just asking for a â€œquarter of an acre for the squatterâ€ out of his half a million acres.

Kenyatta family land-half a million acres- can supply 4 million families with an eighth of a plot. If each family has an average of 5 members per family thatâ€™s 20 million Kenyans out of 30 million Kenyans.

Thatâ€™s bottom 65% of landless Kenyans each owning an eighth of an acre. Kenyans could as well kiss land problems goodbye, if Uhuru would lead the House of Kenyatta into stopping being selfish. Land prices would drop, as supply would correct the mismatch with demand. The common men like you and I would for once afford land. Â Uhurunomics?

The historical presidential debates were meant to be a milestone of democracy, equality, equity and liberty but Uhuru turned it into a theatre of bragging- reading from a script of the absurd. Capitalistic answers cannot substitute moral questions that are about redistributive justice. For a man to one day rest in peace, compassion is a virtue that has to be exemplified by a rich man.

Even Andrew Carnegie one of the richest men in the early 20th C, unlike Uhuru,Â  owned up to the evils of corporate greed and committed his wealth and last years to charity. And even today, The Carnegie family and trustees continue to advance his ideals of giving back through the Carnegie Endowment Fund. Such is the act that helped him die in peace.

The Rockefeller Foundation is also the brainchild of a family intent on rehabilitating an image of a business empire whose image is mired in a cloud of corporate greed and capitalism without compassion.

Uhuruâ€™s capitalism lacks one ingredient, which is compassion. But to regain the trust of the landless masses he has to rebel against family. He has to shake off family baggage. He has to share the spoils with the masses.

Yes Uhuruâ€™s wealth is a birthright, an inheritance. But he is a man above the Â age of majority. He can decline a part of his inheritance, if he wants to regain the moral high ground of redistributive justice. He cannot hide behind his family. The Kenyatta family comprises individuals. Uhuru is â€œman soloâ€. He can commit his portion of inheritance to a good cause. Thatâ€™s what the landless masses and the squatters are asking.

However, Uhuru, as usual has chosen family over the nation, as evidenced by his arrogant answer during the Presidential debate. It took Railaâ€™s intervention to save him from the debate-mob of Presidential wonna-bees that was baying for his blood.

And those pissed off by his answers are many, including Joshua Arap Sangâ€™ who made a Youtube video as a rebuttal to Uhuruâ€™s claims that appear to be disrespectful to the poor and desolate. Those so poor, landless and jobless to be willing buyers, and willing sellers.