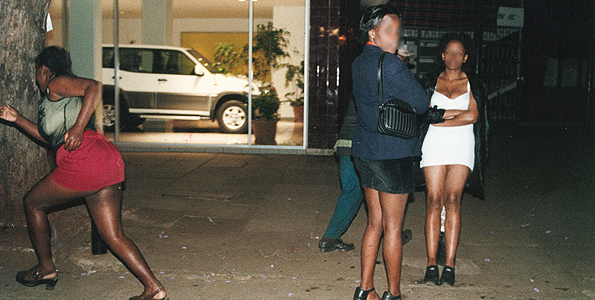 BY:Hash G-Town King In Riyadh and Kuxi Ghai in Nairobi

Four Kenyan Women were arrested in Riyadh, Saudi Arabia for engaging in prostitution and other illegal activities. The news of the arrest of the Kenyans was revealed through an investigative series which was aired on Al Khalejia Tv on 27th of May 2013.

The women believed to be their 20’s were arrested by government-authorized religious police (cleric police) from The General Presidency of the promotion of virtue and the prevention of vice after an investigative journalist (unknown to her) who met one of them through a mobile messaging app pretending to be in need of alcohol and casual sex (both illegal in the Kingdom).

The woman who identified herself as Samila and claimed to be having a “well paying job” at an embassy, met with the reporter and could be heard in a recorded video inside the car negotiating with him and at one point speaking in Swahili to what seemed to be an accomplice who was supposed to deliver alcohol. Later the Saudi journalist asked “Samila” to bring more girls for an exclusive party for his friends.

At around pm the woman while in company of three other Kenyan women arrived at a certain destination where they were supposed to be picked up but immediately after they settled in their “clients” car, cleric policemen who had been filming them got hold of then and arrested them.

Two of the women who identified themselves as Faith and Selina and looked shocked claimed to have been set up by their friend (Samila) whom they said had told them they are going to meet a new kaafeel (sponsor) so that they can work for him and that they did not know that they were going for a party.But it seemed hard for them to convince the cleric police that they were innocent as they contradicted themselves to the extent of describing how they usually dress when going for functions.

The 4 women who are now in custody could face charges ranging from prostitution, unlawful mingling with men and selling of alcohol which carries a heavy punishment in the Kingdom.

This is just one out of a thousand cases concerning Kenyan women in Saudi Arabia as dozens are said to be jail in different cities like Damam and Jeddah facing charges ranging from engaging in prostitution, selling of alcohol among other illegal activities and some are said to have been sentenced inside the Kingdom.

Many of those who find themselves in the wrong side of the law are women who came to the Kingdom as househelps but after 3-4 months run way from their employers so as to seek a better job but end up in doing unscrupulous businesses so as to earn more and this has become tendency among many Kenyan women.

But it’s not only Kenyan women who find themselves breaking the strict rules in Saudi Arabia which is based on Islamic Sharia, dozens of Kenyan men are also said to be in Saudi jails for similar offences while others have been arrested for being accomplices of the such women after being tracked by Saudi authorities for helping or sheltering run-away maids.

Currently there are thousands of Kenyans mostly women who had run away from their employees trying to return home after Saudi King, Abdallah ordered the repatriation of all foreigners without valid work and resident permits and that those willing to stay to rectify their statuses before 3rd July or face stiff penalties.

The Kenyan Embassy in Riyadh just like other nation’s embassies has turned into a beehive of activities trying to meet the deadline with up-to 150 people flocking the embassy on a daily basis trying to get help as the embassy officials trying to rectify statuses of Kenyans and facilitate smooth return back home for those who want to.

But as Kenyans are known for being “hardliners”,some like *Mary who has no legal documents to stay or work in the kingdom, returning back home is not in her mind and she is planning to stay and is currently looking for other Kenyan women with similar mission so as to “struggle” together as she puts it but eventually her hide and seek might end up as tale of one Kenya lady identified as Amina who was seriously injured after she jumped from a story building while trying to run away from Saudi passport department officers who were conducting raids on illegal expatriates.