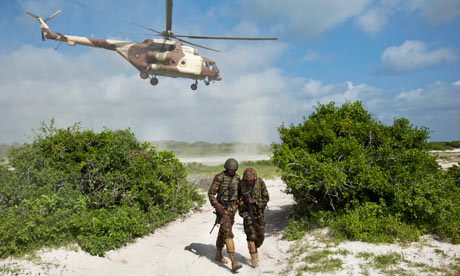 Kenyan soldiers at a base near the town of Bur Garbo, Somalia. Kenyan troops have attacked Kismayo by sea and air. Photograph: Ben Curtis/AP

Kenyan troops have launched an amphibious assault on the port stronghold of Somalia‘s Islamist al-Shabaab militants, landing forces on Kismayo’s beach in a long-heralded attack meant to deal a fatal blow to the rebels.

Residents, many of whom were hunkered down in their homes as the battle continued, said the attack came from the air and sea at around 3am local time. Some expressed fears the assault would signal the start of a wider battle for control of the strategic port among rival clan militias.

“It was an amphibious assault, delicate andÂ â€¦ meticulously planned,” Colonel Cyrus Oguna, a spokesman for the Kenyan military, said. “We have so far encountered minimum resistance,” he added, saying there had been no casualties among the Kenyan troops or their Somali National Army (SNA) allies. The Kenyan army has also been supported in its campaign by Ras Kamboni, a local militia.

Abdi Buule, an elder in Kismayo, said Kenyan and Somali forces had pushed deep into the city.

“The people are worried. No one could go outside this morning, even the people could not cook their breakfast. The fighting is now going on,” he said by telephone.

Al-Shabaab, which is linked to al-Qaida, withdrew from Mogadishu in August last year after fierce fighting with the Ugandan and Burundian troops of a 17,000-strong African Union peacekeeping force â€“ Amisom.

Since then, the militants, who include foreign fighters as well as Somalis and who have imposed a strict form of sharia law in the areas they control, have been forced further into the south of the country.

Kismayo is their last major stronghold, and a key source of revenue: the militants are heavily dependent on earnings from charcoal exports through the port, and taxes levied on businesses.

“We heard roars of heavy guns and aeroplanes flying over us. I fled from home with my two children to the other side of town,” Aamina, 34, said by telephone from Kismayo.

She said she had seen four bodies on Friday morning, including those of civilians. The elder, Abdi Buule, said around 160 people had been arrested by the Kenyan forces, who feared the militants would try to hide among the population.

Oguna said Kenya used most of its naval assets in the operation, and that ground forces, which had been massing for an attack from the other side of Kismayo, were moving in, with some having already entered the city.

He said the operation was carried out mostly by Kenyan forces and fighters from the SNA. “The operation is dynamic. We have been there for only a couple of hours. It is too soon to predict how long it will take,” he said. A lot of infrastructure had been destroyed, he added, and al-Shabaab fighters had been killed although he could not give a number.

“Ships have brought Kenyan troops on our Kismayo beach last night. Fierce fighting between us and them is going on now,” Sheikh Abdiasis Abu Musab, al-Shabaab’s spokesman for military operations, told Reuters.

Kenyan forces crossed the border into Somalia in October last year to pursue the militants officials blamed for a series of kidnappings and cross-border raids. They joined Amisom in June.

In the days before the beach-front assault, Kenyan jets attacked al-Shabaab logistic centres in the port, raising fears among aid groups that many civilians might be killed and injured in a final battle for the city.

Human Rights Watch (HRW) reported in August that at least three civilians had been killed in shelling by Kenyan navy ships. HRW and the UN called on Kenyan troops to do more to protect Somalis during the military advance. Thousands of residents were reported to be fleeing the city in the past few weeks.

The assault came less than a month after activist and professor Hassan Sheikh Mohamud was elected president in Mogadishu, the first leader to be chosen inside Somalia since the 1991 overthrow of dictator Mohamed Siad Barre.

His inauguration raised hopes that Somalia might be entering a new era, although optimism was tempered by a series of deadly suicide bomb attacks in Mogadishu, including one targeting the new president.

Analysts have pointed out that even if Kismayo falls, al-Shabaab fighters may melt into the sparsely populated countryside, harassing the Amisom forces and local population with guerrilla-style hit-and-run attacks.

Some have also raised concerns about a possible power vacuum opening up. It is unclear who would ultimately control Kismayo, a lucrative source of income that has been fought over by Somali clans in the past.

There have been reports of local militias arming themselves, and even of a former warlord travelling to the city from Mogadishu in the past few weeks.

Abdi Buule, the elder in Kismayo, echoed these fears.

“Every person is thinking what will happen in the next days. Al-Shabaab officials escaped but their fighters are still in the townÂ â€¦ People here are very worried over the militias [fighting] alongside with Kenyan forces, who can create new inter-clan rivalryÂ â€¦ KismayoÂ â€¦ is a very strategic town and so now every clan militia is getting ready to have its role in the town,” he said.

The fall of Kismayo will also intensify fears of retaliation within Kenya where security is already very tight. Kenyan youths are known to be fighting with al-Shabaab and there have been a series of grenade attacks on bars and churches in Kenya since the country’s troops crossed into Somalia.