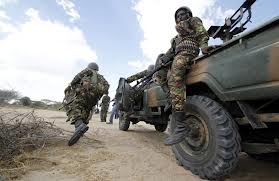 This article titled “Kenyan troops close in on al-Shabaab’s Somali stronghold” was written by Clar Ni Chonghaile in Nairobi, for guardian.co.uk on Tuesday 18th September 2012 15.57 UTC

Kenyan troops are about to advance on Somalia’s rebel-held southern port of Kismayo in a final assault against the Islamist militants of al-Shabaab, according to a military spokesman in Nairobi.

Kismayo’s capture would mark a major breakthrough for the African Union forces fighting the rebels, but rights groups are concerned a protracted battle could lead to many civilian deaths.

A victory would probably reinforce the optimism that greeted last week’s election as president of activist and professor Hassan Sheikh Mohamud, the first leader to be chosen in Somalia since the military dictator Mohamed Siad Barre was overthrown in 1991.

Al-Shabaab, which has been forced to relinquish control of a number of cities and towns in Somalia this year, is heavily dependent on revenue from charcoal exports through Kismayo’s port, and taxes levied on businesses.

However, some analysts warn that defeat would not signal the end of the al-Qaida-linked group, which could melt into the countryside and continue attacking the African Union’s Amisom troops and their Somali allies. It is also unclear who would then control Kismayo, a lucrative source of income that has been fought over by Somali clans in the past.

Military spokesman Colonel Cyrus Oguna said Kenyan troops were stockpiling supplies of fuel and ammunition around the town of Jan Abdala, about 25 miles (40km) from Kismayo, before moving forward.

“The final advance to Kismayo may be in the next one or two days. I cannot tell you with any certainty when [the city] may fall,” he said, adding it might take a week or two to secure victory.

Al-Shabaab said on Tuesday on its Twitter page that “rumours of Mujahideen withdrawing from Kismayo are blatant lies being peddled by the Kuffar [unbeliever] to further their agenda”.

Oguna said al-Shabaab fighters and vehicles from Kismayo were reportedly moving into towns north-west of the city, including Jamaame and Jilib.

“I think they have sensed defeat and the amount of casualties they have incurred â€¦ has been so enormous,” he said, adding that he believed the rebels were heading to strongholds further north.

Kenyan troops crossed the border into Somalia in October last year to pursue the al-Shabaab militants blamed by officials for a series of cross-border raids and kidnappings.

The troops were integrated into the 17,000-strong African Union Amisom peacekeeping force in June, and are advancing with Somali troops and fighters from the Ras Kamboni militia in the south.

Oguna said around 30 al-Shabaab fighters had been killed in the last few days. One Somali soldier also died and one or two Kenyan soldiers were injured, he added.

The Kenyan navy has shelled Kismayo in recent weeks, with Human Rights Watch saying two teenage boys and a pregnant woman were killed on 11 August. It called on the Kenyan government to investigate the incidents.

The United Nations refugee agency, UNHCR, said more than 3,500 people had left Kismayo over the past weeks.