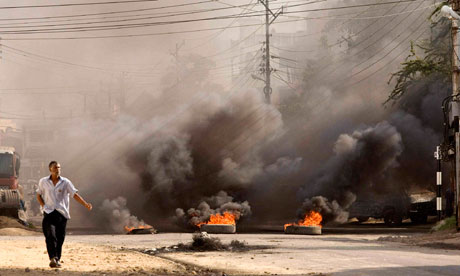 Burning tyres in Mombasa in August during the riots that followed the death of a radical Muslim cleric, Aboud Rogo. Photograph: Stringer/Reuters

Muslim leaders in Kenya fear a new anti-terrorism bill will give more powers to a widely distrusted police force that is suspected of involvement in the disappearances of several Muslims with alleged links to Somalia’s al-Shabaab militant group.

The disappearances, and the killing last month of radical Muslim cleric Aboud Rogo in Mombasa, have enraged Kenya’s Muslims, who make up about 11% of the population, with the majority living along the Indian Ocean coast.

After Rogo was gunned down by unidentified assailants, Muslims in the Indian Ocean city torched churches, looted shops and hurled grenades at police. Three officers were killed.

Activists and community leaders warned that the anger, exacerbated on the coast by poverty, unemployment and perceived neglect by authorities, could erupt again if manipulated, either by politicians or foreign extremists.

As Kenya prepares for its first elections since about 1,200 people were killed after a disputed poll in 2007, rising anger among Muslims is just one piece in a complex mosaic of ethnic, economic, and political pressures in east Africa‘s largest economy.

Al-Amin Kimathi, a human rights activist and chair of the Muslim Human Rights Forum, said at least seven Muslims, most with alleged ties to the al-Qaida-linked Somali militants, had disappeared this year. “We have documented at least seven cases, with eyewitness accounts and â€¦ the modus operandi points to the same thing,” Kimathi said.

In April, the mutilated body of a Muslim cleric, Samir Khan, was discovered in Tsavo national park, a few days after men who identified themselves as police took Khan and a friend off a bus in Mombasa, according to witnesses. The friend is still missing.

“The moment it is cloaked in the war on terror, nobody gives a damn â€¦ That’s where I really feel very frightened about what is going on,” Kimathi said.

The police did not respond to requests for comment, but in the past, officers have suggested that some of the disappearances could have been the result of infighting among al-Shabaab sympathisers.

Kimathi said some of the missing people probably had cases to answer with the Anti-Terrorism Police Unit (ATPU), but that inefficiencies within the police and courts were hampering investigations.

“They reach a point where they get frustrated by the law and the court process and they have realised that the only way to deal with these people is to ‘disappear’ them,” he said.

Rogo was on US and UN sanctions lists for supporting al-Shabaab and reportedly had close ties to the Muslim Youth Centre, a Kenya-based ally of the Somali militants. Khan had been charged with recruiting for al-Shabaab.

Kenya has a long history of extrajudicial killings, and the prospect of security agencies being given more powers under the new anti-terrorism bill worries many observers.

In a 2009 report, the UN’s special rapporteur on extrajudicial killings, Philip Alston, said: “Kenyan police are a law unto themselves. They kill often, with impunity.”

Ben Rawlence, a senior researcher for Human Rights Watch, said the recent disappearances were part of this pattern. “There is no real oversight or judicial control of the police. That structural lawlessness is very concerning,” he said.

In its current form, the anti-terrorism bill, which is due for a second reading in parliament this week, would increase the powers of the police to detain people on suspicion of terrorism, as well as to use techniques such as phone tapping. Rawlence said that “anything that increases the police’s freedom of operation â€¦ is unlikely to be good for human rights”.

Hassan Ole Naado, the head of the Kenya Muslims Youth Alliance, said one concern was how quickly the bill was being pushed through. “Powers that ought to be the judiciary’s powers are now being given to the police force and the executive â€¦ Those powers are prone to terrible abuse,” he said.

Kimathi said the ATPU felt able to act with impunity because of ties with US counter-terrorism forces in a volatile region where Kenya is viewed as an ally, but also a potential target for al-Shabaab and a source of recruits.

Kenya receives millions of dollars in funding from the US state department’s Anti-Terrorism Assistance (ATA), as well as training and FBI assistance on investigations. Kimathi said he believed the ATPU worked under the direction of the FBI. Asked to comment, an information officer for the US embassy in Nairobi said: “The FBI is in Kenya at the invitation of the Kenyan government to work with the Kenyan police.”

Kimathi also said members of a notorious police death squad, known as the Kwekwe and supposedly disbanded in 2007, were possibly involved in the recent disappearances.

The battle against al-Shabaab outside and inside Kenya has sharpened divisions between Muslims and other communities, especially since Kenyan troops crossed into Somalia last October and al-Shabaab threatened to retaliate.

Most Somalis are Muslim and some Kenyans have begun to equate Muslims with Somalis, and with al-Shabaab.

Kimathi described how a man he challenged over dangerous driving typified these attitudes. “He looked at me, and said: ‘Come on, who do you think you are? You are al-Shabaab â€¦ We’ll take you back to Somalia, all of you.’ So that is now what is getting into society. Any Muslim that you see is an al-Shabaab â€¦ He is a guilty person.”