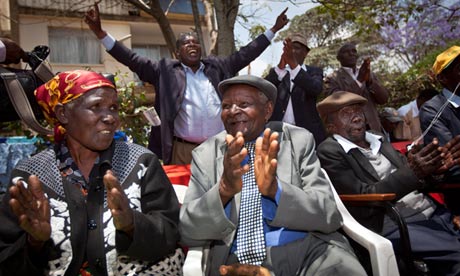 Veterans clap, cheer and dance as news comes through from London of high court ruling that they can claim compensation

The news from London was relayed from a mobile phone and suddenly the men and women who had been sitting silently in the meagre shade around a sun-scorched garden in Nairobi erupted: hugging, cheering, clapping, dancing and eventually raising their hands to the sky and praying.

These veterans of Kenya’s Mau Mau uprising had been waiting for hours for a ruling that vindicated their right to claim damages for the torture and abuses carried out by British colonial authorities.

“I am very, very happy,” said Wambugu Wa Nyingi, one of three claimants in the case. The UK government “has done justice because it is a just government,” he said, speaking in the Kikuyu language and leaning on a wooden stick.

In his written evidence, Nyingi, 85, said he was arrested in 1952 and detained for about nine years. He was beaten unconscious and still bears the marks from leg manacles, whipping and caning.

“I just wanted the truth to be out. Even the children of my children should know what happened,” he said. “What should happen is that people should be compensated so they can begin to forgive the British government.”

The three claimants suffered what their lawyers describe as “unspeakable acts of brutality”, including castration, beatings and severe sexual assaults.

Jane Muthoni Mara, another claimant, clapped and cheered as the ruling was relayed. She hoped the British government would compensate the veterans.

“I’m very happy and my heart is clean,” she said. Asked what she would tell her four children, she said simply: “I will tell them I won.”

In her statement to the court, Mara, who is from the Kirinyaga district in central Kenya, said she was 15 when she was detained and beaten with sticks and a gun butt and had her legs stamped on. She was also sexually assaulted.

“My life was destroyed because I now live in a township and I don’t have a farm of my own,” she said.

“I am so proud of these old people,” said Atsango Chesoni, the executive director of the Kenya Human Rights Commission (KHRC). “These people are the ones who allowed us to live, to go to school.”

She said she did not know how many other claimants would come forward.

“What we would like is a situation where the British just acknowledge that this happened, apologise and provide some form of compensation so that these people can live out their lives in some form of comfort,” she said.

After the ruling was announced, men in suits, straw hats or turbans, many brandishing traditional fly-whisks, and women in headscarves and colourful dresses danced around the garden behind the headquarters of the KHRC.

Professor Henry Stanley Kabeca, a historian, stood watching the celebrations. He said he was a strong supporter of the Mau Mau.

“I feel delighted, completely vindicated. I got a bit demoralised in 1956 when our people surrendered from the forest as a defeated force. We only lost the battle, we won the war, and today is the climax of a long struggle.”

The ruling also marks a kind of catharsis for Kenya, where the history of the Mau Mau movement has always been controversial. After independence in 1963, the country’s first two presidents tried to downplay the group’s role in the struggle against the British.

Kenya’s most numerous ethnic group, the Kikuyu, was split between those who joined the insurgency, and so-called “loyalists” who sided with the British.

“It lays the foundation for us to confront the ghosts of the past in a candid way,” said George Morara, senior programmes officer at the KHRC.

Morara said the KHRC was travelling around the country interviewing thousands of people to determine who else might be eligible for eventual compensation. A legal ban on the Mau Mau was only lifted in 2003.

Charles Ngare, a member of the Mau Mau veterans’ association, raised his hands above his head as a bearded man with a fly-whisk decorated in the Kenyan colours led a group prayer.

The veterans “feel born again. They feel so happy in their spirits,” he said. “This will make their spirits walk.”