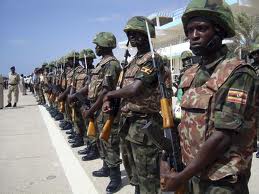 A Kenyan peacekeeper has allegedly shot dead six civilians in southern Somalia, casting a shadow over plans for a final push against Islamist extremists.

The soldier reportedly fired at a group of people who approached a defensive position that the Kenyan army had set up in the town of Jana Cabdalla.

Sunday’s incident could anger the local population in the run-up to an offensive in the southern port of Kismayo, about 30 miles (50km) away, against the Islamist militant group al-Shabaab.

Adan Mohamed Hirsi, a Somali army spokesman, said it had been “a deliberate killing”, with two more civilians seriously injured, and called on the Somali government to intervene.

“This incident is very hurtful,” he told the BBC’s Somali service, saying a group of young men were shot outside a shop in the village of Janay Abdalla. They were reportedly queuing to buy sugar.

The Kenya Defence Force said the shooting happened shortly after al-Shabaab militants attacked Kenyan soldiers who were escorting people to collect water from a well in the village, killing one Kenyan.

“Later on in the day, several people approached KDF defensive positions, where a KDF soldier allegedly opened fire killing six people,” said Colonel Cyrus Oguna, a Kenyan military spokesman. “The soldier was immediately disarmed and has since been put on guarded seclusion.”

The matter is being investigated by African Union force commanders and the Kenyan and Somali armies, who would later release their findings, Oguna said. “The findings will duly be respected and appropriate action taken.”

He added: “KDF reiterates that its operations in Somalia have been conducted with utmost care and concern for civilian safety. This unfortunate incident should not be used as a measure for KDF operations. The quest for a peaceful Somalia remains on course.”

Kenyan troops are part of an African Union peacekeeping force that receives training and equipment from the United States to fight al-Shabaab, which is linked to al-Qaida.

More than 4,000 Kenyan troops launched an offensive against al-Shabaab last October after a string of kidnappings by Somali gunmen, which included the abduction of four Europeans, in Kenya. The government said the kidnappings threatened tourism, which is crucial to Kenya’s economy.

While Nairobi claims its decision to invade southern Somalia has been vindicated, Sunday’s shooting is not the first question mark over Kenyan forces’ conduct. The navy has been accused of causing civilian deaths in Kismayo by shelling al-Shabaab targets from ships. Human Rights Watch reported that two teenage boys and a pregnant woman were killed on 11 August.

Last November the navy shot at a boat, killing four men they believed were Somali militants but who may have been Kenyan fishermen operating along the coast. Oguna said those in the boat defied an order to stop and surrender, and it was not clear whether they were Kenyan fishermen. A military investigation into the incident has not yet reported.

In July Kenyan troops were integrated into the 17,000-strong African Union force, known as Amisom and mainly made up of Ugandan and Burundian troops, which was already supporting Somalia’s weak government against the al-Shabaab insurgency.

Somalia has made progress in the past year in battling the militants and elected a new president earlier this month, but security remains fragile with bomb attacks still carried out by al-Shabaab.