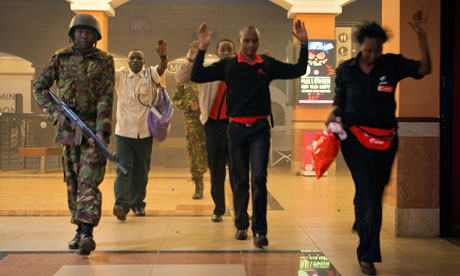 Kenyan security forces, including commando teams and military helicopters, have launched a “final assault” on the luxury shopping mall in Nairobi where a group of armed militants were holding around 30 hostages. As night fell in Nairobi a huge blast reverberated around the Westgate mall where the attackers â€“ thought to be members of the Somali jihadist group, al-Shabaab â€“had been holed up since shooting their way into the shopping centre on Saturday.

The explosion was the loudest heard since the attack began and was followed by a long silence. “This will end tonight. Our forces will prevail,” the Kenyan government’s Disaster Operation Centre said late last night. The carnage in and around the four-storey building, where heavily-armed fighters opened fire on weekend shoppers on Saturday lunchtime, claimed at least 68 lives with 175 people injured.

That toll, which rose steadily throughout Sunday, was expected to climb higher. Kenya’s president, Uhuru Kenyatta, who lost a nephew in the attack, promised to punish those behind it “swiftly and painfully,” and said Kenya “would not relent on the war on terror”. The US president, Barack Obama, called Kenyatta on Sunday to offer condolences, and US support in bringing the perpetrators to justice . The attackers have so far refused any attempts at negotiation, but an al-Shabaab spokesman demanded that Kenya withdraw its troops from Somalia, where they have been fighting Islamist militants since 2011.

“If Uhuru wants peace from us, he should withdraw his troops from Somalia,” spokesman Abu Musab told Reuters. The likely reason why the attackers chose Westgate became apparent as one embassy after another confirmed that some of its citizens had been murdered in the assault. David Cameron confirmed that three Britons had died, and said:

“We should prepare ourselves for further bad news.” France said that two of its citizens had died, both women. Canada’s prime minister Stephen Harper said that two Canadians had died, one of them a diplomat named as Annemarie Desloges, who served in Canada’s high commission to Kenya.

The US government said that the wife of one of its citizens working for the US Agency for International Development had been killed, while four Americans were injured. Security sources said there were at least 10 attackers, including one woman, but there could have been as many as 15.

There was mounting concern that some of the attackers may have escaped the scene on Saturday when as many as 1,000 people were evacuated or escaped amid chaotic scenes. began with a barrage of gunfire at 7am local time as Kenyan soldiers attempted to storm their way into the ground floor entrance to the mall’s largest shop, the Nakumatt supermarket. One of the soldiers who took part in the attack, speaking on condition of anonymity, said that two of Kenyan troops had been killed as they came under sustained heavy fire, including what appeared to be rocket propelled grenades.

“They were very intelligent and they are well-armed,” he told the Guardian. He said that the frequent exchanges of fire between security services and the attackers had been designed to drain their ammunition supplies. A number of eyewitnesses inside the security cordon in the Westlands neighbourhood of Nairobi said that Kenyan special forces who had been assembling outside during the day appeared to be being assisted by foreign military advisers.

Kenyan police, working with officers from the British high commission succeeded overnight on Saturday in erecting a security cordon around the busy commercial district but fascinated crowds gathered on a hillside overlooking the mall and crowded access roads on all sides.

Kenyan State House spokesman, Manoah Esipisu, confirmed that his government had received offers of help in the anti-terror operation from many nations including the UK and Israel, one of whose citizens was reported to own Westgate. “We welcome all offers of help but this is a Kenyan operation,” he said.

The attack, which is the worst that Kenya has witnessed since the 1998 embassy bombings, may strengthen calls from the Kenyan government to abandon the trials of Kenyatta and deputy president William Ruto, due to start at the international criminal court at The Hague in November. Both men face charges of crimes against humanity In a statement from his lawyers, Kenya’s second-in-command, who fades charges of crimes against humanity in 2007-08 after the country’s election. called for an adjournment so he could help govern the crisis.: “Thereafter, Mr Ruto will be required to deal with the aftermath of such a traumatic and tragic event for Kenya.”