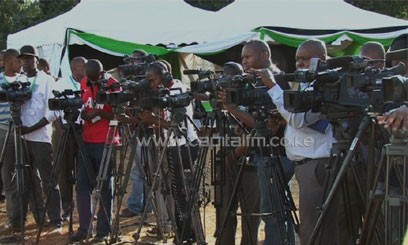 The Mockery of Accountability: MPs Finger Parliament Reporters Over Bribes:

Kenyaâ€™s parliamentary committee on broadcasting and telecommunications has accused reporters who cover the National Assembly of asking for massive bribes from lawmakers in return for positive coverage, a devastating allegation set to rattle the newsrooms and seek editors to rejig staffers.

Kenyan journalists have made a habit of accusing politicians of corruption. But now, they are fighting back.

The explosive allegations came a day after parliament clerk evicted journalists from the media centre, touching off howls of protest, citing lack of room for house committees.

And today, MPs met the Media Council of Kenya to discuss bills that are set to be tabled in parliament. The lawmakers screamed Blue Murders, accusing journalists of out rightly seeking bribes in order to cover them, failure to which many suffer blackout.

â€œJournalists have always accused us of graft, but I tell you, some of them are the most corrupt,â€ a source said.

MCK Executive Director Harun Mwangi who attended the meeting conceded. â€œIt is true the MP complained about journalists seeking bribes. That is an issue of concern to us,â€ he explained in phone interview.

Mwangi however added that MCK was working on a far-reaching research that would expose the working conditions in various media house with a view to find out what are the motivations for journalists to seek bribes. â€œThe research will highlight how much journalists are paid in difference media houses,â€ he explained.

In addition, Mwangi explained that the state regulator would be meeting several house committees later this month to discuss the bills.

Sources said the parliament committee assured the MCK board members that it would explore ways of inviting the parliamentary journalists back to the house to ensure â€œsmooth cooperationâ€ between the House and Fourth Estate.

But before that happens, another parliamentary source added, the lawmakers will seek to have another group of journalists accredited to cover parliamentary proceedings because the current crop is tainted with corruption.

In a statement issued on Wednesday, Parliamentary Journalist Association Journalists Alfonse Shiundu bitched about the eviction from his team from the premises.

Â â€œWe hope more dialogue will take place within the structures of parliament and have the decision reconsidered. Kenyans need to listen to their leaders. Journalists need to tell Kenyans what their leaders in parliament are up to. It must be recalled that it took a long time and persistent effort for the House to let journalists have a place within Parliament for them to file stories for their media houses. Letâ€™s not roll that back under the so-called digital regime,â€ Shiundu said in a statement.

Â Later, the Editorâ€™s Guild threatened a blackout on parliament coverage over the closure of the media centre.

Below is a list of journalists from the mainstream media who cover parliament. We are not accusing any of them of corruption, but its good to put face on the regular journalists who have been evicted from parliament.

Â KTN: Mostly Aaron Ochieng, but the channel has no permanent reporter.

Â NTV: Mostly Enock Sikole, but the channel has no permanent reporter.

Â Editorsâ€™s Note: This is not a complete list of journalist who cover parliament; if we have ommitted any, please drop us an email or hint: jackalnews@gmail.com