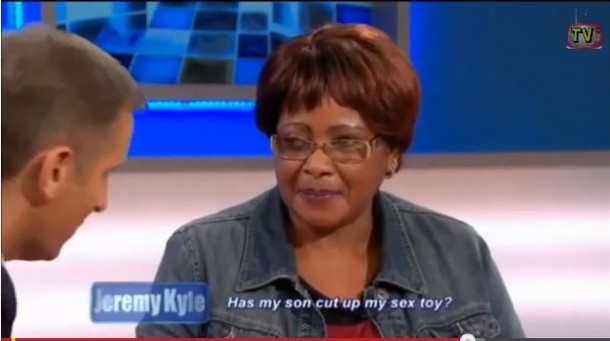 a 47 year old Nyeri born woman living in Britain has accused her son of destroying her sex toys, car and other possessions, the lady who appeared on Jeremy Kyle TV show insisted her son was a devil, he nipped offÂ  her sex toys’s spikes with scissors in more than two occasions and also misplaced her sex lubricant.

The TV audience was sent to prolongedÂ  laughter, she offered the extreme details in heavy Kikuyu/kenyan accent. The son was also at the show, he defended himself from the accusations. The son denied damaging the sex toys on malice.

See the clip by clicking PLAY and fast forward to minute 32:15 of the video.

What is happening to our old people? sex toys at 47??