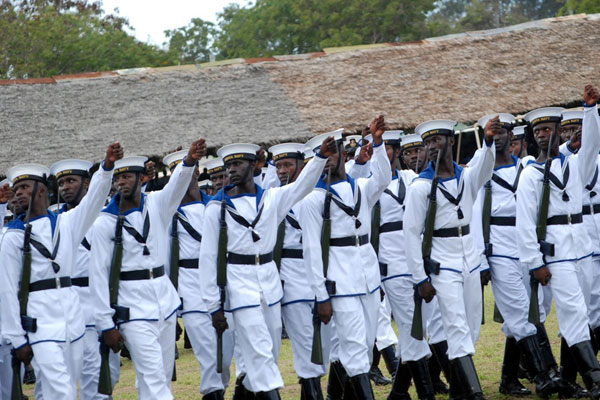 Three Kenya Navy servicemen have been sacked after allegedly attending a political rally in Mombasa two weeks ago.

The three are accused of associating themselves with politics, contrary to the code of ethics governing the military and other discipline forces in Kenya.

Article 239 (3) of the Constitution states that:

(a) act in a partisan manner;

(b) further any interest of a political party or cause; or

(c) prejudice a political interest or political cause that is legitimate under this Constitution.

Military sources indicate that the three were spotted by Intelligence officers who were covering the rally and took their photographs.

â€œLast week they were told that their services are no longer required and ordered to vacate the Kenya Navy premises within two hours,â€ said a source who spoke on condition of anonymity.

On Monday, the three soldiers returned to the Navy headquarters at Mtongwe, Mombasa to process their release documents from the Kenya Defence Force (KDF).

â€œThey also moved their families who have been residing within the Navy servicemen quarters,â€ added another source.

KDF spokesman Bogita Ongeri requested for more time to comment on the issue.