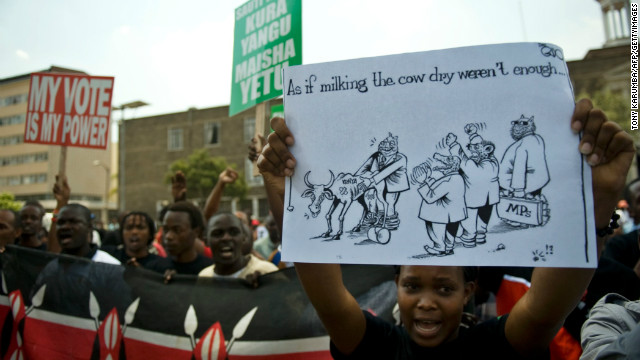 On Tuesday, May 14, 2013, peaceful demonstrators will occupy Parliament buildings in Nairobi to protest against an attempt by Members of Parliament to arm-twist the Salaries and Remuneration Commission (SRC) into yielding to the MPsâ€™ demands for indefinitely higher pay.

The act of occupying Parliament by members of the general public shall symbolize the power and pre-eminence of the public over persons who hold elective office.

In the recent past, local MPs have made concerted attempts to usurp SRCâ€™s mandate of regulating salaries and apportioning the national wage budget across the public sector. Indeed, caving in to MPsâ€™ pressure to disband SRC, the Sarah Serem-led commission surprisingly decided to award MPs a tax-free grant of Sh5 million each for the purchase of vehicles. Negotiations to have MPs salaries increased are ongoing.

1. Using the power of numbers, we seek to give Kenyans the courage to defend their Constitution, which Parliament has endeavoured to overthrow by threatening to disband a constitutionally established body;

2. We want to make Members of Parliament aware that the days of parliamentary dictatorship are over. MPs cannotâ€”and must not!â€”be self-regulating; they must be answerable to the people;

3. We want to send home the message that no one is above the law, and to instill a sense of accountability to persons who hold public office. At the end of the day, it must be borne in mind that even public officers who make the law are subject to that law.